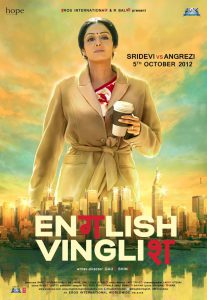 Bollywood icon, Indian superstar Sridevi has died of a heart attack Saturday, Feb. 24, in Dubai. She was there with her family for the wedding of her nephew. Sridevi was 54.

Sridevi is widely adored as a national treasure. Prime Minister Narendra Modi tweeted: “Saddened by the untimely demise of noted actor Sridevi. She was a veteran of the film industry, whose long career included diverse roles and memorable performances. My thoughts are with her family and admirers in this hour of grief. May her soul rest in peace: PM @narendramodi.”

Her tall, elegant film presence will be sadly missed not just in India, but by Bollywood movie fans all over the world. As a tribute to the much-admired actress, here is a review of the feature “English Vinglish,” which had its North America premiere at the Toronto International Film Festival in September, 2012.

Although released in 2012, the feature is most relevant today.  It speaks to all whose first language is not English, who struggle with an inferior complex simply for not knowing the lingua franca, in particular, to immigrant parents who lack the skills to communicate with their own children. Furthermore, in the film, Sridevi offers a powerful voice to the female empowerment movement so prominent today.

If “The Best Exotic Marigold Hotel” is from the outside looking in, then “English Vinglish” is the reverse shot, bringing us a point of view from the inside looking out.

Writer-director Gauri Shinde gleaned from her real-life experiences to craft this delightful dramedy that is rooted in human miscommunication, but speaks much more.

The legendary Bollywood star Sridevi comes back to the big screen after a 15 years hiatus to play Shashi, a devoted wife and mother in a modern, middle-class family in Pune, India. She is a lively, capable woman, a good cook who runs her own catering business with her specialty, the ladoos, sweet golden balls of dainty delights.

Yet Shashi has to struggle with one major insecurity: she knows little English. Well, you may think, what’s the big deal. But with English recognized as the lingua franca by those living in a former British colony, and in a patriarchal society, Shashi as a woman with no English sorely feels disadvantaged, even within her own family.

Her daughter teases her for her pronunciation, even her preschooler does that. She shies away from parent-teacher interviews, for her daughter goes to an English-speaking school. No matter how devoted a wife she tries to be, she feels the gap between herself and her husband Satish (Adil Hussain, “Life of Pi”, 2012; “The Reluctant Fundamentalist”, 2012), who is proficient in English and thus becomes her spokesman in social situations.

“She’s born to make ladoos,” her husband’s intended praise of her cooking skills only reflects the confining social reality in which she finds herself. Not knowing English makes her feel subservient, without a voice.

The tipping point comes when Shashi’s niece is getting married in New York City. She has to go on her own to help her prepare for the wedding. Her family will travel later. An Indian woman in a sari on her first international flight alone, Shashi is understandably timid and insecure. But a friendly and helpful gentleman who sits beside her eases her anxiety. That role is aptly played by the veteran actor Amitabh Bachchan (“The Great Gatsby”, 2013)

A funny and quite original scene comes when this helpful gentleman suggests they watch the same in-flight movie, and he be her interpreter. Only he wears the headphone, translating the dialogues out loud from English to Hindi for Shashi to hear, in a voice that’s animated and true-to-life, sound effects included. Here’s the rub: the movie is an action thriller of terrorists committing violence with guns and bombs. Other passengers trying to sleep have to shush him, short of subduing him for uttering bomb and death threats.

New York City, the place where one can transform oneself in a surprising way. Shashi has her first major language mishap in a coffee shop. Turning insult into courage, she enrolls in an English language class. The camaraderie of fellow learners lowers her guard and builds up her confidence. In a few short weeks, she has not only gained some mastery of the language but supportive friendship, with one being more intimately intended.

Shashi’s vindication comes at the wedding of her niece. Her husband and children have arrived for the occasion, not knowing her secret English lessons. In front of all the guests, Shashi is asked to make a speech to the newlyweds. While her husband tries to deflect the embarrassment and excuses her for lack of English, Shashi stands up and uses her new-found voice to urge the bride and groom to value equality and treat each other with respect, a heartfelt speech well intended for her husband, and a lesson that brings tears of remorse to her daughter. This is one of the most moving wedding speeches in films I’ve seen. In case you’re curious, another memorable one is Dustin Hoffman’s at his daughter’s wedding in Last Chance Harvey (2008).

The 130-minute movie could benefit from keener editing, but the charming Sridevi carries it through with style and grace. It is a joy to watch her even amidst her insecurities, for she has won my heart with her quiet determination to overcome the odds, her strength of character shines through beautifully.

The movie offers a variety of entertainment, albeit not without some contrived moments. It is a full pack of heartwarming comedy, melodrama, cultural mishaps, the ESL classroom, Bollywood style music and dance numbers, but above all, reality. The film has brought to the forefront children showing disrespect for a parent with no English. This could be an issue particularly among immigrant families. Such a portrayal could well be indicative of society at large. Shashi has demonstrated that language does not define who she is, nor should it be the condition of respect and meaningful relationships.

The fact that we in North America can thoroughly enjoy a Hindi feature, no doubt by reading English subtitles, could only mean that we can cross the language barrier to understand each other and appreciate different points of view. English may be the lingua franca in certain parts of the world, but it is compassion that joins us. What better way than to be entertained as we go about learning other perspectives?