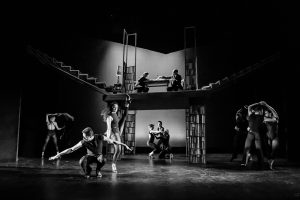 In 1970, two towering personalities of the American intelligentsia, black author and social critic James Baldwin and white anthropologist Margaret Mead, sat together and recorded a conversation on what is a defining subject of the American experience — race. More than 40 years later, two contemporary artistic icons, Anna Deavere Smith and legendary choreographer Donald Byrd, re-imagined this monumental moment in history and created “A Rap on Race,” a genre-obliterating evening of “theater for the 21st Century.”
This innovative new work, which had its world premiere in 2016 at the Seattle Repertory Theatre, features Byrd as James Baldwin and Kathryn Van Meter as Margaret Mead, with acclaimed company artists from Spectrum Dance Theater. The work takes the form of a series of choreographed physical duets played in tandem or juxtaposed with verbal duets gleaned from the Baldwin/Mead tapes. Through this investigation of movement, text and music, “A Rap on Race” excavates new meaning from the cultural artifact, enlivening the current conversation around racial and cultural equality.
“A Rap On Race” will offer a forum for honest, non-self-censored conversation, including a pre-show Ordway Extra. Audience members are invited to come at 6:30 p.m. for a discussion on racial justice in the arts, moderated by Robin Hickman, CEO and Executive Producer of SoulTouch Productions, featuring Threads Dance Project Artistic/Executive Director Karen Charles and Threads dancers performing excerpts of their acclaimed work, The Secrets of Slave Songs; Dr. Taiyon Coleman, assistant professor of English, St. Catherine University, and the Rev. Dr. Curtiss DeYoung, CEO of Minnesota Council of Churches.
After the performance, audiences are invited to join artists and dance company members for a 20-minute Q&A Talkback and a post-show mingle. Both events take place in the Target Atrium.
This “A Rap on Race” engagement is part of Taking Our Place Center Stage, an initiative through which the Ordway and SoulTouch Productions, in collaboration with communities of color in the Twin Cities, commit to a continuing partnership of creative programming, education, and entertainment that inspires everyone. In addition to the Saturday evening performance, Donald Byrd led a workshop on exploring dance as a vehicle for social justice for North High students in early December, and Spectrum Dance Theater company members will perform on Jan. 11 at North High for students from North High, Perpich Center for the Arts and other metro high schools.
Spectrum Dance Theater presents “A Rap on Race” is part of the Ordway’s 2017-18 Music & Movement Series sponsored by Target. Generous support for Music & Movement is provided by The Scrooby Foundation. The presentation of “A Rap on Race” by Spectrum Dance Theater was made possible by the New England Foundation for the Arts’ National Dance Project, with lead funding from the Doris Duke Charitable Foundation and The Andrew W. Mellon Foundation. For tickets and more information, visit Ordway.org.
ABOUT SPECTRUM DANCE THEATER PRESENTS “A RAP ON RACE”
A Rap on Race
Premiere: May 5, 2016, at The Leo K. Theatre at Seattle Repertory Theatre
Co-Creators
Donald Byrd & Anna Deveare Smith
Choreography & Direction
Donald Byrd
Lighting & Scenic Design
Jack Mehler
Costume Design
Doris Black
Stage Manager
Sara Torres
Text
A Rap on Race by James Baldwin and Margaret Mead
Music
The Black Saint and the Sinner Lady composed by Charles Mingus
The Cast
JAMES BALDWIN – Donald Byrd | MARGARET MEAD – Kathryn Van Meter
Spectrum Company Artists
Blair Jolly Elliot, Marco Farroni, Paul Giarratano, Marte Osiris Madera, Nia-Amina Minor, Robert Moore, Madison Oliver, Alexander Pham, Emily Pihlaja, Andrew Pontius, Fausto Rivera, Mary Sigward, Jaclyn Wheatley
ABOUT DONALD BYRD
Donald Byrd, the enfant terrible of the New York dance scene of the 1980s and 90s, achieved international visibility for the creation of the The Harlem Nutcracker. Byrd is a Bessie Award winner for The Minstrel Show and was nominated for a Tony Award for his choreography for the Broadway production of The Color Purple. Byrd’s body of work is varied and impressive, spanning more than four decades, pushing the boundaries of movement and message. The work may be purely an aesthetic experience or it may wrap itself around a compelling civic issue, encouraging a community to examine ideas and attitudes that it may impact.
ABOUT ANNA DEAVERE SMITH
Anna Deavere Smith has performed in film, television, and on stage. She currently plays Attorney General Mary Campbell on Madame Secretary and appears as Alicia on Blackish. She played Mrs. Akalitis on Nurse Jackie, Nancy McNally, the National Security Advisor, on the West Wing and was featured in the series Presidio Med. Smith has been featured in several films, including Rachel Getting Married, The American President, The Human Stain, Dave and Rent.  As a writer and a humanist, she has received numerous awards for her work including the prestigious 2013 Gish Prize for achievement in the arts, the 2012 National Humanities Medal presented to her by President Obama, and the 1996 MacArthur “genius” Award. In 2015, she was named the Jefferson Lecturer, the federal government’s highest honor in the Humanities.
ABOUT SPECTRUM DANCE THEATER
Under Donald Byrd’s artistic leadership since 2002, Spectrum Dance Theater has become the foremost contemporary modern dance organization in the Pacific Northwest, gaining recognition nationally and abroad. For over 30 years, Spectrum Dance Theater has brought dance of the highest merit to a diverse community working to make dance accessible to all through contemporary dance performances and high quality dance training in a variety of dance styles.  Three components comprise the organization: the professional Company, the School and Outreach programs.  With Donald Byrd’s visionary artistic leadership, the organization has embarked on an exhilarating transformation that has attracted world class dancers, produced some of the most avant-garde works in contemporary dance, and generated local and national praise.  www.spectrumdance.org
Tickets
www.ordway.org
Ticket Office: 651-224-4222
Groups: 651-282-3111
Price
Tickets start at $18
Tickets start at $18 and are now available online at www.ordway.org, by phone at 651-224-4222 or in person at the Ordway ticket office.
Share