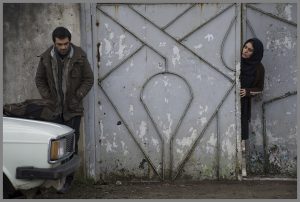 A scene from Mohammad Rasoulof’s “Man of Integrity,” playing at the 2018 San Francisco International Film Festival, April 4 – 17, 2018. (Courtesy of SFFILM)

“A Man of Integrity”, a 2017 feature from Iranian director Mohammad Rasoulof is a selection in the Masters section of the 61st San Francisco International Film Festival. According to the Program Guide, these are “films by the storytellers that have defined this generation of filmmaking.”

It is sadly ironic that there are continual dissident voices coming out from the oppressive Iranian regime from filmmakers who are banned from making any more movies.  Like his compatriot Jafar Panahi who continues to film even in the guise of a taxi driver with just a mounted dash cam in his car, Mohammad Rasoulof is another one of those suppressed voices. Rasoulof had been released on bail after a year in prison, his six-year sentence still pending. It is therefore courageous of him to make yet another feature secretly. His feature “A Man of Integrity” describes the systemic, rampant corruptions even just at the local level, a rural town somewhere in Northern Iran.

Winner of the Un Certain Regards Award at the 2017 Cannes Film Festival, “A Man of Integrity” poses some realistic questions for anyone who wants to go against the grain of the land. Can a man ignore the bribery ridden system, from bank manager to the police and prison, by upholding his moral integrity and not following the expected norm of getting things done? In a country where “you’re either the oppressed or the oppressor”, can a man choose to be neither? Reza (Reza Akhlaghirad) and his wife Hadis (Soudabeh Beizaee) find out the answer the hard way.

At the beginning of the film, Reza utters determinedly, “I don’t pay bribes.” He doesn’t yield to unjust practices. His previous Tehran experience – expelled from teacher’s college for protesting the bad food served to workers in a factory – apparently has not done much to shake his strong moral stance. Is he an honorable idealist or merely stubborn? 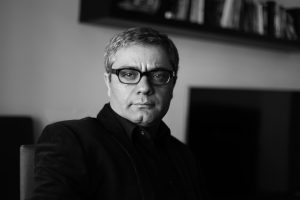 Moving from Tehran to a rural village in Northern Iran and operating a gold fish farm doesn’t make Reza’s life any simpler. And for Hadis, Reza’s loving and supportive wife, being the head teacher in the local school involves decision-making that are not as straightforward as she has expected. She too has to face her own moral dilemmas. Amidst all these circumstances, the couple strive to lead a quiet family life and bring up their young son in the rural community.

A malicious neighbor, Abbas (Misagh Zare Zeinab), who works for ‘The Company’– although not made clear to viewers, likely the whole network of influence under the town council – has the intention to destroy not only Reza’s goldfish but take over his property. Being brave and upright just may not sit well with anyone in the village.

Reza’s troubles mount up quickly. First his water to the fish pond through Abbas’s premises is cut off. Then he is imprisoned for breaking Abbas’s arm in a fight, all due to a falsification note from a doctor. Later, with scenes reminiscence of Hitchcock’s “The Birds” when flocks of avian attackers try to eat up all the dead fish in his pond. Somebody has poisoned them. On and on we see how Reza’s once strong moral ground eventually crumble.

Serene scenes of Reza’s personal escape inside a cave with clear blue water makes a stark visual contrast against the dull, grey overcast sky and gloomy environs of Reza’s fish farm. Another means of escape is a secret homemade concoction he consumes. Not much explanation is given viewers there, but we do see a man trying to cope, even just by taking a shower and rubbing madly to clean his own body in a metaphorical parallel. His efforts apparently do not fare well. We see Reza become more distressed, driven to the brink. Director Rasoulof leads us ultimately to a final twist of a surprise ending, sardonic and open-ended. 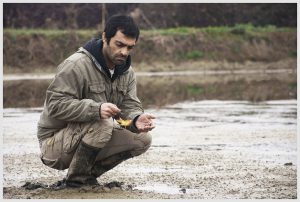 A scene from Mohammad Rasoulof’s “Man of Integrity,” playing at the 2018 San Francisco International Film Festival, April 4 – 17, 2018. (Courtesy of SFFILM)

Akhlaghirad’s acting is intense, internal and absorbing. Rasoulof makes us empathize readily with Reza’s rage and see the desperation in his circumstances, and Akhlaghirad is instrumental in delivering that effect. Playing the role of Hadis in this her second feature, the relatively new actress Soudabeh Beizaee is indelible, her quiet and captivating performance makes a fine balance with Reza, her poise an appealing screen presence. “A Man of Integrity” is a well-executed production, a voice that ought to be heard.

“A Man of Integrity” will be screened in the opening weekend of the 61st San Francisco International Film Festival, on April 6 – 8. Click here for tickets and further info https://www.siff.net/festival.