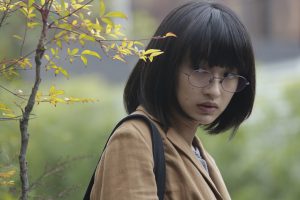 The debut feature film of Japanese director Yoshiyuki Kishi, “A Double Life”, is in competition for the New York Asian Film Festival’s award for first- and second-time directors whose films are having their North American Premiere.

Adapted from the novel by Mariko Koike, the film is a tall order for Kishi as she transposes philosophical questions onto the screen. Tama (Mugi Kadowaki) is a graduate student in philosophy and lives with her game designer boyfriend Takuya (Masaki Suda). Her Master’s Thesis is entitled “What is Existence in Contemporary Japan”; a noble investigation, but maybe more for seeking answers for her own struggles.

Apparently stuck in the methodology of such a venture, Tama seeks the advice of her professor, Shinohara (Lily Franky). On his desk is a book by the acclaimed French photographer Sophie Calle, “True Stories”, a photo collection of her efforts in following strangers on the streets of Paris. At the spur of the moment, Shinohara suggests Tama do the same but focus on one person to find out what it means to be human.

Tama performs her task to the point of obsession. She tails her subject, Ishizaka (Hiroki Hasegawa), a neighbor in a nearby building, day in and out. On the surface, Ishizaka is a successful editor, a family man with a beautiful wife and cute daughter. Soon, Tama’s tailing leads her to discover his secret affair. Tama’s academic project subsequently entangles her in a web of confusion and confrontation, with the fallouts landing on her own relationship with her boyfriend.

Director Kishi is effective in leading us to follow Tama as she tails Ishizaka, a double tailing. We as viewers observe Tama from behind or from a distance. But how much does Tama know about her subject just by tailing him and observing from the outside? Does shadowing her subject give her answers for her quest?

Another storyline lies with professor Shinohara, whose terminally ill mother leads him to an existential crisis of his own. The last part of the film reveals to us yet another thematic discovery: people just aren’t what they appear on the surface. 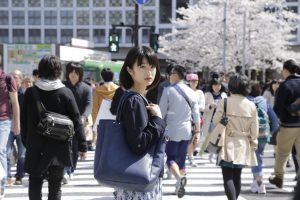 I have no doubt that Kishi’s intention is earnest and that her project is a sincere quest for meaning, yet it’s a challenge to convey philosophical pondering using a visual medium. It’s easy to fall prey to dialogues and words, plainly telling instead of showing, which is the case here. How do we know about Tama’s feelings of emptiness, or her being clueless as to the meaning of life? They are explicitly spoken within the dialogues as if explaining to viewers. Such moments tend to be contrived and clichéd, failing to evoke depth of emotions or arouse empathy.

The legendary French director Robert Bresson, the master in communicating the transcendent, had once said: “I try to show certain parts and hint at the rest, preserving the mystery.” What is missing here might be the element of subtlety. Further, a dash of humor would liven up the mood as well.

Nevertheless, “A Double Life” is still an admirable attempt at posing the quest for meaning and purpose, particularly needed in our contemporary, urbane metropolis.