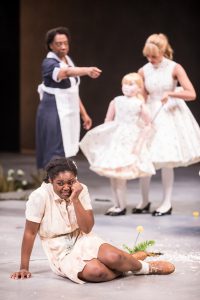 There’s no dispute that the director, Lileana Blain Cruz boldly transformed Morrison’s fictitious story into a non-fiction parallel play which represents America’s current state of racial prejudice in 2017. “The Bluest Eye” captured the all too familiar intra-psychic, traumatic impact that racism and violence continues to have on people of color. In the play, racist hate unfolds multi-generationally. It’s no surprise that a happy ending could not grow within these emotionally toxic conditions.

Brittany Bellizeare brilliantly played the main character, eleven-year-old Picola Breedlove. This was evidenced by Friday night’s standing ovation. Bellizeare skillfully drew the audience into an emotionally tumultuous world of racial victimization and self-hatred, difficult to stomach and hard for any compassionate human being to witness.

Stepahnie Berry’s rendition of Mrs. Breedlove personified an exhausted African American woman forced to repress a life of complex trauma and unthinkable poverty. Berry succinctly revealed through the character of Mrs. Breedlove how enduring everyday racism rooted in self-righteous indignation, slaughters a victim’s soul. Socially cast as inferior, Berry’s character moved in and out of marginalized roles such as, mother, inferior worker and abused wife. Berry’s passionate acting reveals the deep pain that must be ignored in order to function and raise Picola.

The verbose conversations between the two daughters/sisters, Frieda (played by Deonna Bouye) and Claudia (played by Caral Duren) were flawless. The character Frieda emulated kind consideration and courage. Duren’s communications about racism were both prophetic and candid. Both characters tackled the heart wrenching issues that plague Black girls and ways some are brain washed into a life of servitude.

Through intimate and playful dialogue, the audience was exposed to an inside and uncoded conversation that most young, Black girls wouldn’t typically have in front of White folks. Yet, the relationship between the two sisters revealed a lived reality and painful understanding of what it’s like to be constantly subjected to racial hatred so vile, it becomes the taste in your mouth that you can’t quite get rid of. Both parents, played by Regina Marie Williams and Shawn Hamilton, eloquently embodied the internalized messages of bigots, which demanded a life sentenced to self-hatred.

This play asks audience members to reflect deeply about the legacy of racism and ways in which hate towards communities of color dehumanizes everyone. The character Mr. Breedlove (played J. Bernard Calloway) depicts a deeply confused and disturbed perpetrator. Yet, it was obvious that the root of evil in its original form was born out of hate, captivity, rape and genocide, passed on from slavery and then one generation to the next. Moreover, Calloway’s strong performance of a troubled man plagued by racial hate calls us to re-examine ways we continue to blame the victim in 2017 similar to ways the story unfolded in 1941.

The entire cast including Shawn Hamilton as the Daddy, Regina Marie Williams as Mama, Caroline Strang as Maureen Peal did an amazing job of underscoring how the impact of homespun racism and narrow-minded realities about African Americans forcefully continues to control the hearts and minds of the disenfranchised.

The acting, set and play were picturesque and outstanding. “The Bluest Eye” explicitly told the story of what happens when racism holds your soul hostage. However, it left the audience with the task of filling in the historical events, which resulted in tragic results. Too often, partial stories on stage, push aside the story of the perpetrator, leaving some people to create a re-victimizing story based on nothing but racial biases. While I understand that nothing good can come from racism, I felt that the complete absence of Racism by Whites could potentially alleviate the White perpetrator from taking responsibility. Because the audience was comprised of very few people of color, I left feeling concerned that some theatergoers would be tempted to create an inaccurate historical backdrop, which works to the advantage of Whites and ignores the inescapable and vulgar aftermath that slavery continues to have on everyone.

Even though, “The Bluest Eye” was set in 1940, published in 1970, the overwhelming presence of racial victimization on stage and in the United States of America in 2017, delivers a poignant message which stresses the looming ways that racial hate is transplanted into people of color at its core. I wondered, “Can a human being ever feel whole, when treated like half of a person?”

“The Bluest Eye” encapsulates the danger of a genetically predisposed American Dream whose recessive or dominant gene seemed to determine one’s fate forever.