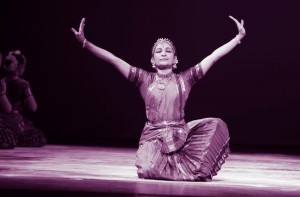 1,001 Buddhas: Journey of the Gods (Photo by Marc Norberg)

The World premiere of Ragamala Dance Theatre’s “1,001 Buddhas: Journey of the Gods’ will be held at Cowles Center for Dance and the Performing Arts on Friday and Saturday, March 22 and 23 at 8pm, and Sunday, March 24 at 2pm.

Ragamala’s co-Artistic Directors Ranee and Aparna Ramaswamy, a mother and daughter team, use Indian and Japanese art forms in a contemporary perspective of universal spiritually-charged movement.

1,001 Buddhas: Journey of the Gods is inspired by twenty-eight Hindu deities that guard the 1,001 Buddhist statues of the Sanjusangendo temple in Kyoto, Japan. The myriad histories and energies of these gods and goddesses bring to the modern stage a vision that traverses the scope of spiritual experience, from the intimate to the infinite.

Ragamala dancers Amanda Dlouhy, Jessica Fiala, Tamara Nadel, and Ashwini Ramaswamy (Ranee’s daughter and Aparna’s sister) also perform as deities. The statues are derived from Hindu deities who mingle with one thousand and one Buddhas at the Sanjusangendo temple in Kyoto. The Ramaswamys studied the carvings and then animated them to deliver a static dance in combination with the taiko drumming.

Tickets: $29. The Cowles Center for Dance and the Performing Arts is located at 529 Hennepin Avenue in downtown Minneapolis. The Box Office number is 612-206-3600 or www.thecowlescenter.org.