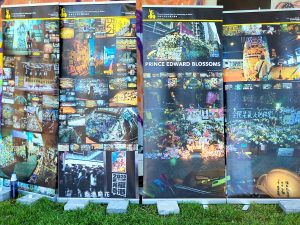 Tiananmen massacre memorials held in cities around the world.

For decades, a large candlelight vigil was held in Hong Kong’s Victoria Park each June 4, to commemorate those killed when Chinese soldiers crushed the Tiananmen Square protests in Beijing on June 4 1989. However, the annual event has been banned since a national security law was passed in 2020. Many activists who organized the memorial have been arrested and said the Hong Kong government seemed determined to prevent any public Tiananmen memorial.

This year, which marked the 33rd anniversary of the Tiananmen Massacre, Hong Kong police warned the public not to gather on the Tiananmen anniversary. Warnings were issued by authorities ahead of the day that “participating in an unauthorized assembly” risked the maximum penalty of five years’ imprisonment.

“The police have warned us: Dare not wear black and come near Victoria Park,” a friend who lives in Hong Kong told me.

While Communist China and its Hong Kong government were able to ban the June 4 Victoria Park gathering in a bid to wipe away any reminders of the deadly episode in Chinese history, they were not able to ban numerous memorials around the world to keep the 6-4 memory alive.

One of the largest such memorials took place in Toronto Saturday, 6-4. Organized by the Federation for a Democratic China in Toronto, the event drew over 2,000 people. They gathered at the Chinese Consulate in downtown Toronto and staged a protest to denounce the erasure of political freedoms in Hong Kong, as well as China’s human right violations in Xinjiang and Tibet.

From there, the crowd, led by two young people holding a banner that reads “Never Forget Tiananmen Massacre,” marched to the University of Toronto 6-4 Monument. A memorial and candlelight vigil were held to remember those who died on June 4, 1989. There were displays of photos and art works detailing scenes of Tiananmen Square in June 1989 as well as images of the 2019 pro-democracy movement in Hong Kong. Attendants also demanded China and Hong Kong release hundreds of political prisoners and listened to speeches by activists, some whom recently moved to Canada from Hong Kong and sang some of the songs traditionally sung at the Victoria Park Memorial.

A poster at the memorial said “Remember Tiananmen Massacre, Remember Hong Kong” in English and “The candle flame will never be extinguished. Victoria Park is everywhere” in Chinese.

Event organizer Ms. Won Won Ng said that democracy and freedom of speech are universal values. However, those rights have been completely stripped away from the people of Hong Kong. Therefore, it is important for those who live in free societies to carry on the fight for democracy and to keep alive the history of 6-4.

A Toronto resident who used to live in Hong Kong and attended every Victoria Park 6-4 memorial from 1995 to 2020 went to this year’s Toronto event because he feels an obligation to do so.

“Hong Kong is done. It has completely assimilated with Communist China,” he said. “With more and more HongKongers moving to the free world, it is imperative for us to keep this event on going, to educate our new generation and never forget. The Communist Party is trying hard to erase this shameful history. We the free world must say no to them and preserve it.”

Indeed, because the annual huge memorial in Hong Kong has vanished, numerous gatherings have sprung up in cities around the world such as Toronto, Vancouver, Taipei and several cities in Taiwan, Tokyo, London, Sydney Washington D.C. and New York.

“Now Hong Kong can no longer tell the truth and the real history,” said another attendee. “Because of Hong Kong’s prohibition and suppression, it has blossomed everywhere.”

“We don’t have the chance to go to Victoria Park anymore, but now there are many Victoria Parks like this across the world,” said another attendee.

October 20, 2022
Linking the China-US rivalry to Ukraine and Taiwan