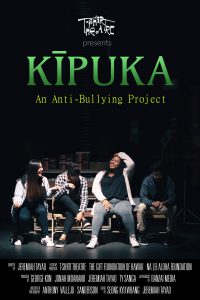 “T-Shirt Theatre presents: Kīpuka” is an anti-bullying project that addresses bullying, cyberbullying, and teen suicide prevention – written and performed by the students ages 13-18 at T-Shirt Theatre, a performing company based in Farrington High School. The students stories, which are performed live in front of over 1,200 of their peers in a packed Farrington High School auditorium, are drawn from personal life experiences and are 100 percent original.

Directed and produced by T-Shirt Theatre alum Jeremiah Tayao, the documentary is a behind the scenes look at the program and gives insight into how the lives of its participants are changed. The film is an extension of the ongoing “Kīpuka” project that takes on a variety of perspectives on bullying like cyber-bullying, self-bullying, being a bystander to bullying, confronting abusive relationships, and even taking the bully’s perspective. “Kīpuka” demonstrates how positive safe spaces and influences like family and community can help counteract the effects of bullying.

Founded by George Kon and the late Walt Dulaney in 1985 at Farrington High School, T-Shirt Theatre has long been a kīpuka itself for many generations of students, deep in the heart of Kalihi, Oʻahu. In the story, rehearsal, and performance process, the students are taught to rehearse for life – acquiring important life skills that they will be able to apply to life beyond the stage.

Tickets are available at https://www.hiff.org/films-and-events-fall-2018/view/t_shirt_theatre_presents_kipuka_2018. For more information on HIFF visit www.hiff.org.

T-Shirt Theatre is a Community of Practice where Kalihi youth come together around the practice of dramatic arts. Participants make a commitment to themselves and other company members to engage because they find value in learning, practicing the art, and in the culture of the community. Participants experience an arc of development that results in their becoming contributing adult citizens.

A Message from the Director, Jeremiah Tayao

“T-Shirt Theatre presents: Kīpuka” is the first feature length film I have had the privilege of directing. With “Kīpuka,” I have the opportunity to make a film about an organization that has molded me into the man I am today, also enabling me to share the story of one of my earliest and most influential mentors, George Kon.

Like many of the students featured in Kīpuka, I attended Farrington High School and developed my voice and gained confidence by performing in T-Shirt Theatre. There, I performed on a big stage in a packed auditorium in front of thousands of my peers. I learned how to rehearse for life. To be prompt, professional, and pleased to be here. Our stories are valuable, and kids from Kalihi deserve to have a voice. T-Shirt Theatre provides a platform for that expression.

It is especially inspiring how T-Shirt Theatre empowers its students. They are allowed to be writers, directors, and performers in high school. They are encouraged to express themselves freely – and with Kīpuka, the students tackled topics like bullying, cyber bullying, and teen suicide. They are able to address these topics responsibly thanks to the tutelage and guidance of T-Shirt Theatre’s directors and the real life experiences shared by the guest speakers they bring in.

This idea of kīpuka —the remarkable occurrence in a volcanic eruption, safe spaces exist that are untouched by lava — perfectly epitomizes how T-Shirt Theatre and organizations like it provide safe spaces for young people in need of that sanctuary.

I am a filmmaker because I developed my love for storytelling at T-Shirt Theatre. I can tell this story because I have lived it. I am honored to be able to share their stories in this film and I hope that you enjoy the hard work my crew, the cast, and the entire T-Shirt Theatre organization and its affiliates have put into making this film a reality.

About the Hawaii International Film Festival

Established in 1981, the Hawaii International Film Festival is a non-profit organization dedicated to the advancement of cultural exchange and media awareness in the Pacific Rim. HIFF is a premier international film event that has won the praise of governments, filmmakers, scholars, educators, programmers and film industry leaders across the globe. HIFF’s programming has two particular mandates: to be a festival of record for emerging films from Asia, the Pacific, and North America and to present the top festival films from around the world, annually screening films from over 45 countries. HIFF also presents educational content and panels in the fields of film and music, and mobile entertainment and gaming. These transmedia programs reflect HIFF’s commitment to exhibiting innovative creative content coming from the Asia Pacific Rim.