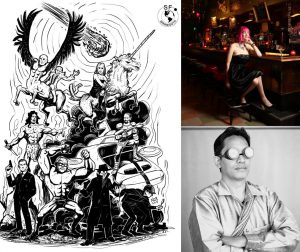 MINNEAPOLIS (July 18, 2018) — The Speculations Reading Series continues with guest of honor readings at this year’s Diversicon.

Diversicon is a project of SF MINNESOTA, a multicultural, multimedia organization dedicated to improving contacts among groups and individuals interested in speculative fiction, in and out of the traditional SF community. Organizers note “Our continuing mission: to provide the most thoughtful Programming and the mellowest, most welcoming Parties of any Minnesota SF convention, and to making the SF community more closely reflect the cultural diversity of Minnesota in the third millennium.” Tickets are $45 at the door and $35 for students for the entire weekend.

Charlie Jane Anders is the author of All the Birds in the Sky, out now. She’s the organizer of the Writers With Drinks reading series, and she was a founding editor of io9, a website about science fiction, science and futurism. Her stories have appeared in Asimov’s Science Fiction, The Magazine of Fantasy & Science Fiction, Tor.com, Lightspeed, Tin House, ZYZZYVA, and several anthologies. Her novelette “Six Months, Three Days” won a Hugo award.

Bryan Thao Worra is the president of the Science Fiction and Fantasy Poetry Association, a 40-year old international literary organization celebrating the poetry of the imaginative and the fantastic. A Lao American writer, he holds over 20 awards for his writing and community leadership including an NEA Fellowship in Literature and was a Cultural Olympian representing Laos during the 2012 London Summer Games. In 2009 he received an Asian Pacific American Leadership Award from the governor’s Council on Asian Pacific Minnesotans. He has presented at the Smithsonian Asian Pacific American Center, the Minneapolis Institute of Art, the Loft Literary Center, Intermedia Arts, Kearny Street Workshop, the Institute for Contemporary Art, among many others, and recently as a Visiting Artist with University of Merced Center for the Humanities.  The author of six books, his work appears internationally in Australia, Canada, Scotland, Germany, France, Singapore, Hong Kong, Thailand, Korea, and Pakistan.