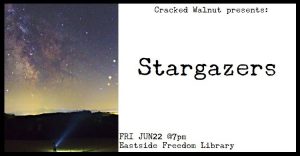 Cracked Walnut continues its regular reading series with the the theme of Stargazers this month.

Established in 2010, Cracked Walnut believes in the power of the creative spirit, and particularly the creative writing spirit of the  Twin Cities. Cracked Walnut organizes readings in traditional and non tradition spaces in the Twin Cities metro area to procure a love for live  literature, community and creativity. In addition to the various literary readings they present throughout the Twin Cities metro area and elsewhere in Minnesota. They offer writing workshops and sponsor contests and other programs designed to promote literary endeavors for writers of all levels and backgrounds. You can visit them online at:  http://www.crackedwalnut.com.

The mission of the East Side Freedom Library is to inspire solidarity, advocate for justice and work toward equity for all. The library houses  non-circulating research collections that appeal to interested general  learners as well as scholars, with innovative databases and finding  aids that make using the collections fun and vital.

Josh Brown is a writer of fiction, non-fiction, and poetry. A graduate  of the University of Minnesota–Duluth with a degree in English Literature, he has spent the past 15 years in the publishing  industry working for and with award-winning publishers and best-selling authors.

An active member of the Science Fiction and Fantasy Poetry Association, Brown’s work can be found in numerous  anthologies as well as in Star*Line, Scifaikuest, Mithila Review, Fantasy Scroll Magazine, and more. His essay, “Poems and Songs of The Hobbit” was recently featured in Critical Insights: The Hobbit(Salem Press, 2016). He served as editor for issue 20 of Eye to the Telescope, the official online journal of the SFPA. He currently lives in Minneapolis with his wife and two sons.

Riawa Thomas-Smith was born and raised in Minneapolis and writes weird  fiction and poetry. She has performed short stories, poems and the occasional song at open mics around the Twin Cities since the early  1990s. She read at Storyfest in 2016 and once won Poetry Division of the  Misfits writing contest.

Mike Finley is a writer, poet, and videographer from Amherst, Ohio. In  2001, Finley self-published his collected works, Yukon Gold: Poemes de terre  He described the 500-plus page collection as the largest chapbook ever published.

Finley has published many books of poetry,  nonfiction, and humor, from presses such as Litmus, Inc. (Lucky You, 1976); Minnesota Writers Publishing House (Home Trees, 1976); Vanilla Press (The Movie under the Blindfold, 1976); and Salthouse Press (Water Hills, 1985). Other books by Finley include For the Young Poets of Cleveland (NightBallet Press); The Poet Voznesenski; Spit on the Griddle; Poets Ruin Everything;  Letting God Go; The Curtis Hotel and Other Confabulations; Don’t Be Like the Moon; and Defending the Cake.

Finley is co-editor with St. Paul bread baker Danny Klecko of LIEF Magazine, an online journal of arts dedicated to bright messages. He has collaborated on three print volumes with Klecko: Out for a Lark (2013), The Bluebeard of Happiness (2013) and A Pox on Your Blessings (2013).

Finley is a video maker with over 50 short films.  He was the winner of the KPV Kerouac Award, 2011.

Finley’s journalism, criticism and other work have appeared in Rolling Stone, St. Paul  Pioneer Press, Minnesota Monthly, Paris Review, Success Magazine and  Guideposts. He was awarded a Wisconsin State Arts Fellowship for fiction in 1985. In 2010 he published Zombie Girl, a novella about the death of his daughter Daniele Finley.

Frances Kai-Hwa Wang is a journalist, essayist, speaker, educator, and poet focused on issues of diversity, race, culture and the arts. The  child of immigrants, she was born in Los Angeles, raised in Silicon Valley, and now divides her time between Michigan and Hawai‘i County in Hawai‘i. She has worked in philosophy, ethnic new media,  anthropology, international development, nonprofits and small  business start-ups.

The author of six books,  Thao Worra’s work appears in over 100 international publications. His accolades  include a Fellowship in Literature from the National Endowment for the Arts and he was a Cultural Olympian representing the nation of Laos during the 2012 London Summer Olympics. His work is part of numerous  Smithsonian projects and has appeared in  Australia, Canada, England, Scotland, Germany, France, India, Singapore, Hong Kong, Korea, Chile,  Mexico and Pakistan.