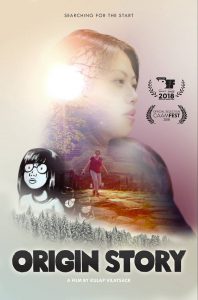 The West Coast Premiere of the Lao American documentary Origin Story will be held at CAAMFest at 6 p.m. Sunday, May 13 at the Kabuki AMC, 1881 Post St, San Francisco.

Selected as a centerpiece documentary for CAAMFest, Origin Story marks the directorial debut of actor/writer/podcaster Kulap Vilaysack as she explores her tangled family tree to find out who she is. When Vilaysack was 14, she took her father’s side in an argument and her mother replied, “Why are you defending him? He’s not your real dad.”

Twenty years later, she’s finally ready to learn what that means. Origin Story is “a feature length, international quest with stops in Los Angeles, Minnesota, and Laos to meet the biological father she never knew. On the road, unforeseen revelations strike as hilarious or heartbreaking, rarely in between.”

Her documentary is a deeply personal but universally relevant tale of immigration, conflict, identity, and personal responsibility. Interviewees in the film include members of her extended family, husband Scott Aukerman, and close friends, like Sarah Silverman, Casey Wilson, June Diane Raphael and Howard Kremer.

A panel following the film will feature director Kulap Vilaysack and CAAMFest’s Masashi Niwano. A second screening will take place Saturday, May 19 at 2:10 p.m. at the Roxie Theater, 3117 16th St., San Francisco, followed by a Q&A with Kulap Vilaysack and

Jennifer Chu. You can see the Origin Story Trailer at http://vimeo.com/258562274 Tickets are available at: https://caamfest.com/2018/films/origin-story.

The documentary “Phetmixay Means Fighter” will also be screened during the festival by Lao American scholar and film-maker Rita Phetmixay, examining the journey of Phetmixay’s father, a veteran of the Royal Lao Army.

The festival is organized by CAAM (Center for Asian American Media), which is a nonprofit organization dedicated to presenting stories that convey the richness and diversity of Asian American experiences to the broadest audience possible. CAAM does this by funding, producing, distributing and exhibiting works in film, television and digital media. For more information on CAAM, please visit www.caamedia.org.