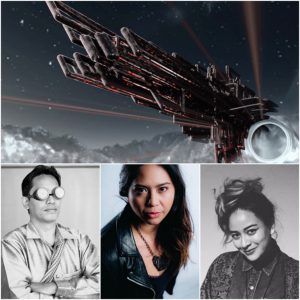 Hmodern Hmong and the Science Fiction & Fantasy Poetry Association (SFPA) are bringing Fresh Off the Starships – Diasporic Asian Narratives to San Francisco! What does the Asian American imagination look like? For one night only, this is a question the featured readers will be sharing with the community.

A free reading, it will be held on Tuesday, May 15th the San Francisco Public Library – Main, Koret Auditorium on 100 Larkin St, San Francisco. The event will take place from 5 to 7:30 p.m.

The poetry presented will highlight the diverse voices of the Asian and Pacific Islander American community and to help celebrate the 40th anniversary of the Science Fiction and Fantasy Poetry Association. Confirmed readers include Bryan Thao Worra, Elgin-Award nominee Lauren Andrei, and Lisa Pradhan. In 27 years as an award-winning writer, this is only Bryan Thao Worra’s third reading in San Francisco.

Hmodern Hmong is a project that seeks to dive deeper into the growing Hmong community in the United States of America. Even before the first wave of immigrants touched USA soil, the Hmong had committed themselves to the U.S.  Their vision is to document and tell the stories of the Hmong to help preserve their history and to provide engaging discussions about what it means to be Hmong in a modern society from high tech to high fashion and everything in between.

“This reading is significant for both the Science Fiction and Fantasy Poetry Association and for Asian Pacific American Heritage Month as both of them mark their 40th anniversary this year,” said Thao Worra, the president of the SFPA. “I’m honored and delighted to see so many of our community members coming together for this. San Francisco has a tremendous literary legacy and significance to Asian American writers thanks to voices such as Barbara Jane Reyes, and the Kearny Street Workshop.”

Among the evening’s readers is Lauren Andrei Garcia, an emerging Bay Area multidisciplinary based artist. She describes herself as “born to a viraginous, Filipina woman and a green-thumbed Mexican man.” She is a part time professor of nursing, full time multidisciplinary storyteller. She is a member of Granny Cart Gangstas, an all women of color sketch comedy troupe, and is a resident artist of Bindlestiff Studios. She has performed poetry, comedy, and drama at Temescal Studios, SF Sketchfest, Exit Theatre, East Oakland Arts Alliance and Studio Grand Oakland. Her poetry book Shipwreck Smiles delves into the misery of losing her mixed race underwear and was recently nominated for an Elgin Award.

Lisa Pradhan is a multimedia artist and organizer based in Oakland, Calif. Lisa explores autoethnographic gestures rooted in the Nepalese­-American Diaspora through media such as site ­specific performance, video, installation, writing, and soundscapes. Lisa’s shown at the Asian Art Museum, the Pacific Heritage Museum, and AS Gallery and co-­curated the Performing Arts showcase for Kearny Street Workshop’s APAture 2017: Unravel.

Hauntie is the recipient of the 2016 Robert Dana Anhinga Poetry Prize for their debut collection, To Whitey and the Cracker Jack (Anhinga Press, 2017). TWCJ has been listed by Stephanie Burt as a notable book for 2017 in the Academy of American Poets. Haunite is a local of California’s Central Valley and holds B.A.’s from the University of California, San Diego in Visual Arts Studio and Ethnic Studies. This fall, they will be a graduate student at the University of California, Merced in the Interdisciplinary Humanities Graduate Group with an

Scott Ortega-Nanos and Akande X are editors-in-chief for Maji News, a monthly Afrofuturist newspaper and press operating out of Oakland. Maji covers news in the African diaspora with a focus on spotlighting essayists, and fiction writers in the Afrofuturist tradition.

In addition to his role as the president of the SFPA, Bryan Thao Worra is key figure in the Lao American literary arts movement in diaspora. This year marks the 5th anniversary of his book of poetry DEMONSTRA, the 2014 Elgin Award for Book of the Year. He holds over 20 awards for his writing and community leadership including an NEA Fellowship in Literature. The author of 6 books, his work appears internationally in Australia, Canada, Scotland, Germany, France, Singapore, Hong Kong, Mexico, Thailand, Korea, and Pakistan.

Renee Ya is Hmong American and grew up in Fresno, CA. Secretary of Science Fiction & Fantasy Poetry Association (SFPA). She spends her days vanquishing evil spirits in the name of the moon in the San Francisco Bay Area. Published in the Smithsonian Asian Pacific American Center’s “A Day in the Life Of Asian Pacific America.”

For further information about Fresh Off The Starships, community

members can visit here for more details and tickets or the SFPA journal website.

Additional events with the SFPA are being organized across the U.S., including Texas, Illinois and Minnesota.