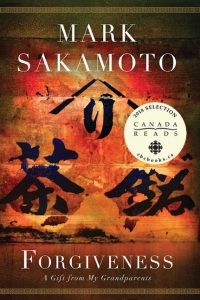 CALGARY — Mark Sakamoto’s family memoir and autobiography was first published in 2014. The book reemerges to popularity now due to the Canada Reads 2018 event.

The annual battle of the books is CBC’s reading campaign. Five Canadian media and entertainment celebs will defend one of the five shortlisted books via national broadcast March 26-29. Audience can tune in on the debates via radio, TV and live stream online. Sakamoto is a lawyer by training and has enjoyed a varied career. In “Forgiveness”, he writes about his grandparents’ real-life experiences, two contrasting but equally traumatic WWII accounts.

Mark Sakamoto’s maternal grandfather Ralph MacLean is from the Magdalen Islands in the east  coast of Canada. In 1940, he enlisted with the army voluntarily together with his friend. After a few months’ training they were sent overseas to Hong Kong, oblivious to the perils into which they were driven. With the British already retreating a hopeless post, MacLean’s garrison did not have a chance to defend the then British Colony. In a few short weeks after their arrival, all two thousand or so Canadian soldiers were either dead or turned POWs living in sub-human, horrific conditions under their Japanese captors.

“… the fate of 819 men was sealed. They would never return home. The remaining 1,155 survivors would be forgiven if they sometimes felt they were the unlucky ones.”

Later, MacLean was shipped to Japan to work for the Japanese war effort, from POW to slave laborer. That he survived at all was a miracle.

Cut to the other side of the world in North America. Mark’s paternal grandmothers Mitsue and Hideo Sakamoto were born in British Columbia, and called the fishing town of Celtic, B.C. home. Mitsue’s father, together with thousands of other Japanese Canadians, had their own boats and were doing well as fishermen in a closed-knit community. During the time Ralph MacLean was barely surviving as a POW in Japan, the Sakamotos, being Japanese Canadians, went through their own battle in North America. Their families were interned and sent to rural Alberta as forced farm laborers. The family fishing boat, their home and possessions were confiscated. Together with thousands of Japanese Canadians–many Canadian born–Mitsue, Hideo and all members of their extended families, young and old, were put on a train barely suited for human passengers, under the watchful eyes of policemen with rifles, and transported to Lethbridge, Alberta. There Mitsue and Hideo were separated with their parents as they were sent to different farms to work as laborers, living in shacks of wood planks and dirt floor.

After the war, Ralph MacLean came back from Japan and settled in Calgary, Alberta. Mitsue’s families knew they had no home to return to in B.C. after receiving a compensation cheque of $25.65 from the Canadian government for the loss of all their properties. They decided to remain in Medicine Hat, Alberta. Fate has it that Ralph’s daughter Diane and Mitsue’s son Stan met in a high school dance. When Ralph eventually met his future son-in-law, who looked like one of his wartime tormentors, he knew he needed to leave the past behind:

“Mitsue and Ralph became instant friends. There was an unspoken understanding between them… they had both discarded the past, keeping only what they needed. They did not compare hardships or measures injustices. They knew there was no merits to that.”

Two families who had suffered maltreatments of varying degrees during the war and for very different reasons came together as their children joined in marriage. What a wonderful story. While the thematic materials are worth telling, the book reads like it lacks the editorial supervision needed to make it a cohesive whole. The writing is fast-paced, sentences are short and descriptions are vivid, especially the war years’ ordeals for Ralph in Asia and Mitsue’s family in Alberta. Yet there are sections that are disjointed. In many places, paragraphs and sentences need a sharp eye of editing to compose a more congruent structure with clarity. The photos are helpful for readers to visualize, but there are no captions right underneath except all stated in a list at the back of the book, not too drastic a fault but an inconvenience still.

With such a drastic history from both sides of the family and a bold one-word title “Forgiveness”, the author tells us in only a few lines how Ralph arrived at forgiveness, that is when he read his Bible during the last days in the Japanese war camp, turning to Mark 25:11, “And when you stand praying, if you hold anything against anyone, forgive him, so that your Father in heaven may forgive you your sins.” The title leaves readers with expectations that the book fails to elaborate by providing more internal reflections and insights.

The first two-thirds of the book about the war years are stark personal experiences many North Americans may not have known. These painful, eye-witness accounts told to the author by his grandparents are very moving. But after that, the last part of the book about Mark and his parents, especially at the end how he had to care for his mother’s debilitating addictions after his parents’ divorce reads like another story.

Nevertheless, for the personal accounts as a POW under Japanese hands during WWII, and the maltreatment of Japanese Canadians during the same time right here in North America, Sakamoto’s book is of value as an eyewitness account to history and a cautionary real-life tale of how we ought to go forward as a civilized country. The last section of the book could well lead to another personal memoir dealing with the urgent social issue of addictions.

“Forgiveness: A Gift from my Grandparents” by Mark Sakamoto, HarperCollins Publishers, Toronto, 2014.

I thank HarperCollins Publishers for my review copy.

For more info about the upcoming CBC Canada Reads, go to: http://www.cbc.ca/books/canadareads