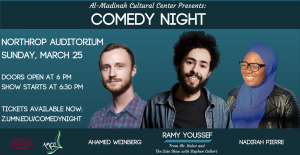 MINNEAPOLIS (March 17, 2018) — The Al-Madinah Cultural Center is presenting its annual Comedy Night, an annual tradition that features Muslim comedians and to showcase the presence of Muslims in media and entertainment.
This year’s headliner performance will be Ramy Youssef, who will perform at 6:30 p.m. March 25, 2018 at Northrop Auditorium on the University of Minnesota Twin Cities campus, 84 Church St SE, Minneapolis, MN 55455. Youssef made his network debut last year on The Late Show with Stephen Colbert. He also appears in a reoccurring role on the hit USA Network TV show, “Mr. Robot.”
Youssef is also the artistic director for the New York Arab American Comedy Festival and the founder of the Middle Eastern sketch group, Sketchy Arabs. Youssef will be accompanied by Ahamed Weinberg, a Los Angeles based comedian from Philadelphia, who recently made his late night stand up debut on Late Night with Seth Meyers on NBC. He is one of Vulture’s 20 Comics to Watch and was awarded New Face at the 2016 Just For Laughs Festival in Montreal.
The opening act will be social media star Nadirah Pierre, a college student at Montclair State University. She uses humorous wit and satire to shed light on issues that she faces in her personal everyday life as well as issues that are prevalent in the Muslim and African American communities.
Last year’s event drew in over 1500 attendees and featured Hasan Minhaj, Senior Correspondent on The Daily Show.
Doors open at 6 p.m. Tickets are $10 for UofMN students, $13 for non-UofMN students and $18 for the general public. Tickets can be purchased online at z.umn.edu/comedynight or call 612-624-2345.
Al-Madinah seeks to create a better understanding and appreciation for the diverse culture of Islam through educational, social, and community activities at the University of Minnesota and to groom future leaders from its campus community.