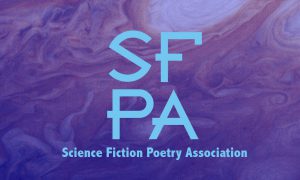 In a statement from the Science Fiction and Fantasy Poetry Association, the organization explained “International Speculative Poetry Day seeks to highlight the vibrant legacy and extraordinary achievement of speculative poets; introduce communities to the delights and benefits of reading and writing speculative poetry; make speculative poetry an important and innovative part of our cultural life.” They noted that speculative poetry has produced some of the nation’s leading creative artists and influential books, performances, and exhibitions, inspiring other artists, educators, and community builders around the world.

The Science Fiction and Fantasy Poetry Association is preparing to observe its 40th anniversary in 2018. This will include readings, presentations, workshops, publications and exhibitions across the U.S. and abroad, including events at CONvergence, Diversicon, Arcana and other conventions.  The SFPA was established in 1978 by Suzette Haden-Elgin and has an international membership representing over 19 nations and cultures including United States, Italy, Canada, Brazil, United Kingdom, Ireland, Romania, Poland, Denmark, Germany, France, Spain, Israel, South Africa, Singapore, Thailand, Laos, the Hmong, South Korea, Australia, and New Zealand. 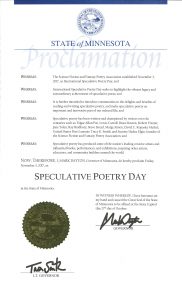 The Science Fiction and Fantasy Poetry Association publishes two journals: Star*Line and Eye to the Telescope. It recently welcomed a new editor for Star*Line, Vince Gotera, who will succeed Wisconsin-based poet F.J. Bergmann. They also publish an annual page of speculative poetry readings. The 2017 curator was California poet Ashley Dioses.

The SFPA oversees three major literary awards for poetry: The Rhyslings, the Dwarf Stars, and the Elgin Awards. This year’s Rhysling Award winners were Marge Simon for “George Tecumseh Sherman’s Ghosts,” and Theodora Goss for “Rose.” This year was also the first year a Hmong poet was nominated for a Rhysling, with Burlee Vang’s “To Live in the Zombie Apocalypse.” David C. Kopaska Merkel was this year’s Rhysling Awards chair. Robin Mayhall chaired the 2017 Dwarf Star Awards for short form poetry. “aster than the speed of lightf” by LeRoy Gorman received first place. The 2017 Elgin Award winners for Book of the Year and Chapbook of the Year were recently announced as Jeanine Hall Gailey for Field Guide to the End of the World and Neil Aitken for the chapbook Leviathan. Books by Jenna Le, Marge Simon, Margaret Rhee, Wendy Rathbone, and John C. Mannone were also recognized.The chair for the Elgin Awards was Minnesota poet Josh Brown, with 52 books and chapbooks nominated, the largest in the history of the awards.

Nikkia Chaney was this year’s judge for the annual SFPA Speculative Poetry Contest. The awards were issued in several categories. In the Dwarf category, 1st place went to “flight” by Kanika Agrawal. In the Short category Jake Sheff won 1st place for “On First Looking Into the Sculpture of the Song.” In the Long category, “The Fragmented Poet Files of a Police Report” by Stewart C. Baker received 1st place. 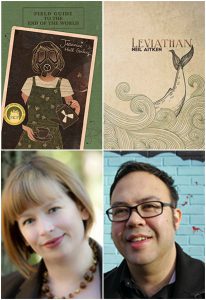 International Speculative Poetry Day’s observation on Nov. 3rd also coincides with the 60th anniversary of Laika’s groundbreaking journey into outer space, inspiring the world with a renewed sense of hope and what is possible through science, curiosity, and collaboration. The organization is currently conducting officer elections, and recently completed approval of its new by-laws, a necessary step towards formal incorporation as a non-profit organization. You can visit the SFPA at www.sfpoetry.com.