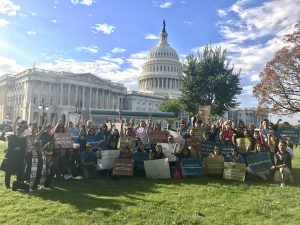 WASHINGTON, D.C. (Sept. 13, 2017) — Hundreds of leaders from the National Coalition for Asian Pacific American Community Development (National CAPACD) and South Asian Americans Leading Together (SAALT) rallied together Sept. 12 to challenge the administration’s attacks on immigrants and people of color.

The rally was to address emboldened white supremacy that has impacted safety in local neighborhoods. Asian Americans and Pacific Islanders from Boston to Honolulu stood together to #CounterActHate in our #OurNeighborhoods, chanting “No Ban, No Wall, Sanctuary for All” to demand a reversal of policies that target, profile and penalize Muslim and immigrant communities, pushing back on Islamophobia, xenophobia and white supremacy. The rally was also to advocate for the Dream Act in Congress.

National CAPACD’s Executive Director Seema Agnani opened the rally by referring to the impact of these policies on local neighborhoods, “We love our communities. We love our neighborhoods. Since this election, we’ve seen increased numbers of hate violence. We’ve seen increased visibility of ICE in our neighborhoods. Our children are afraid to go to school. People are afraid to go to work. We can’t live this way. These are our cities. This is our country.”

Fahd Ahmed, Executive Director of Desis Rising Up and Moving (DRUM), spoke about the experiences of undocumented and working-class Muslims in Jackson Heights in New York City, a neighborhood that is home to immigrants from across the world, whose residents are currently living in fear because of profiling and surveillance by local police and immigration enforcement. “If the Administration says it is okay to surveil Muslims, it sends a signal. It sanctions hate. It is the sanction of hate into actual policy.”

Chinatown CDC Executive Director Rev. Norman Fong connected the Muslim Ban and current Islamophobic sentiment to a long legacy of xenophobia shaping anti-immigrant rhetoric. “My dad was in prison because there was a ban against the Chinese, the Chinese Exclusion Act. He couldn’t go to school. He couldn’t get into a hospital. He couldn’t get a job. He had to be a farmworker.”  Rev. Fong also shared his own personal experiences, as a Chinese-American growing up in San Francisco’s Chinatown and being targeted by hate violence. Though decades apart, the experiences of South Asian immigrants in Queens today too closely reflect the experiences of a Chinatown kid growing up in the shadows of the Chinese Exclusion Act of 1882.

Advocates at the rally also expressed outrage at the recent decision to cancel the Deferred Action for Childhood Arrivals (DACA) program, which has left millions of young people and their families vulnerable to deportation. This is another attack on immigrant communities and neighborhoods. Rally chanters shouted “Deport Me? No Way! Undocumented and Here to Stay!” National CAPACD Director of Organizing Anj Chaudhry stated, “National CAPACD stands against any attempts to rip immigrant families apart, disrupt our neighborhoods, and threaten the safety of young people.”

“As an immigrant to the United States, I know that our nation’s embrace of immigrants is part of what makes it great,” Lieu said. “I stand firmly with my colleagues to fight against this action and will do whatever I can to protect our DREAMers.”

Mekong NYC Executive Director Chhaya Chhoum fiercely reminded us, “This is Home. We are here to stay. And the only thing I’m going to ban is white supremacy.”

About National CAPACD: The National Coalition for Asian Pacific Americans Community Development (National CAPACD) is a coalition of more than 100 community-based organizations spanning 22 states and the Pacific Islands. Collectively, the Coalition improves the lives of over two million Asian American and Pacific Islanders (AAPIs) who live in poverty by providing voice, tools, and shared knowledge to drive change. www.nationalcapacd.org