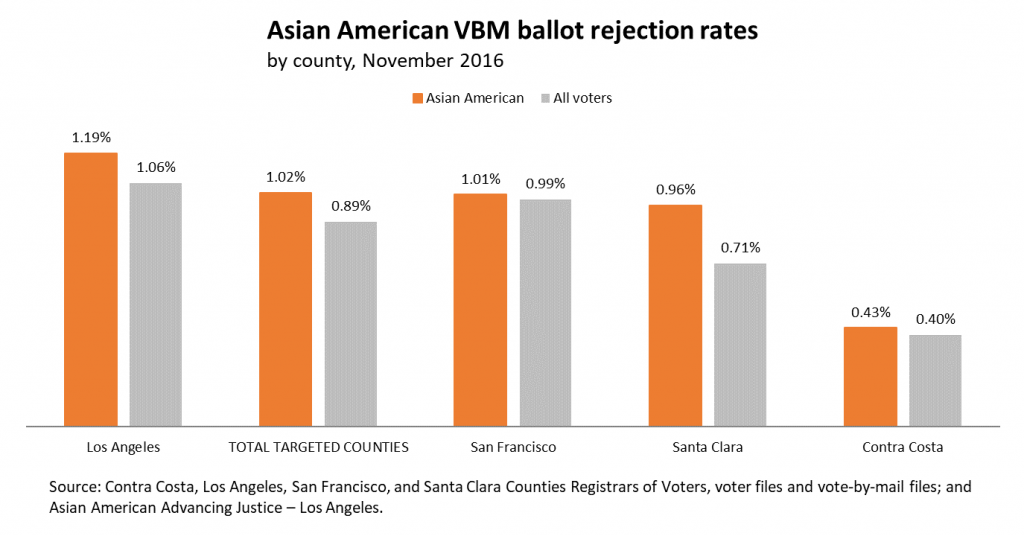 Advancing Justice-CA also found that rates of rejection were higher among young voters and naturalized citizens. “When we examined the intersection between age and nativity, we found the highest rejection rates among Asian Americans to be in the group of voters who are 18-24 year olds and foreign born,” said Joanna Lee, senior demographic research analyst at Asian Americans Advancing Justice – Los Angeles, the lead author of the brief. “Their rejection rate was over 2 percent.”

Among the counties analyzed, a non-matching signature or “signature mismatch” was the most common reason for VBM ballot rejection among all voters but was disproportionately higher among Asian American VBM voters. California recently extended the return date to Election Day and allows voters to fix an unsigned VBM envelope.

“We think signature mismatch should be that next barrier that is addressed,” said Deanna Kitamura, voting rights project director at Asian Americans Advancing Justice – Los Angeles. “And we hope election officials and community based organizations use our issue brief as resource for educating voters.”

“With the 52nd anniversary of the Voting Rights Act, this study emphasizes that there are still barriers that must be eliminated before all eligible voters have equal access to the ballot,” said Jonathan Stein, voting rights program manager at Asian Americans Advancing Justice – Asian Law Caucus.

Advancing Justice – ALC was founded in 1972 as the nation’s first legal and civil rights Asian American organization. Recognizing that social, economic, political and racial inequalities continue to exist in the United States, Advancing Justice – ALC is committed to the pursuit of equality and justice for all sectors of our society, with a specific focus directed toward addressing the needs of low-income, immigrant and underserved Asian Americans and Pacific Islanders.