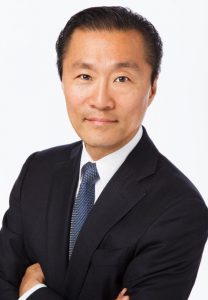 WASHINGTON, D.C. (Aug. 28, 2017) — The Council of Korean Americans is proud to announce that Don Liu has been named Outstanding Leader of the Year and will accept this award at our Third Annual Gala and Awards Dinner. Don is Executive Vice President, Chief Legal Officer and Corporate Secretary for Target Corporation.
Liu is known in the legal field as an “In-House Titan,” having held the top legal officer positions at numerous Fortune 500 companies including IKON, Toll Brothers, Xerox, and now Target. He is equally well-known for using his power to promote diversity within the highest ranks of the corporate legal community.
Liu emigrated to the US from Korea in the early 1970’s when he was ten years old. Growing up, his father ran small businesses: a grocery, a beer distributor, a gift shop. Like many Korean immigrant families they spoke no English when they arrived. They were often taken advantage of, Liu said.
In some ways, not much has changed. Today, immigrants in this country still struggle to be accepted as Americans. We are still regarded as “the other.”
On the other hand, but for pioneers like Liu, we would be much worse off. While his intention was to become a civil rights lawyer, he entered the corporate legal world and never forgot his roots. As he rose through the ranks, crusading for minority participation was not just his night and weekend job; it was his day job.
In 1999, when Liu was named general counsel of IKON, he was the only Asian American general counsel of a Fortune 500 company. Today there are fifteen — thanks in large part to Liu’s tireless promotion of Asian American talent and his belief that diversity is also good for business.
Liu’s leadership was enhanced through the work of advocacy organizations, in which he played important leadership roles — the National Asian Pacific American Bar Association (NAPABA), the Asian American Bar Association of New York (AABANY), and the Minority Corporate Counsel Association (MCCA).
Organizations like these share many of the same goals and values as the Council of Korean Americans; we even share members. Like them we believe that our community’s contributions are undervalued in this country; that it is vital for our voices to be heard; that nurturing the next generation of leaders is one of our highest callings.
CKA’s mission aligns with Don’s life mission: to lift up our community, to fight the good fight, and to lead by example.
The Third Annual National Summit & Gala will be held Saturday, Oct. 21, in Washington, D.C.