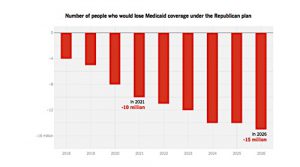 SAN FRANCISCO (June 27, 2017) — The Congressional Budget Office (CBO), a non-partisan government agency whose analyses of the effects of federal legislation are generally accepted to be the most accurate, has issued its assessment of the Senate Health Care Bill. The CBO analysis confirms the general perception that the bill is tax reform masquerading as health care reform.

The Senate Health Care Bill is a bill to cut taxes for wealthy Americans. It will lead to a $700 billion tax cut, with 45 percent of that tax cut going to those making more than $875,000 a year. Those in the top 0.1 percent who have $5 million or more in income will get a tax cut of nearly $250,000 a year. The top 20 percent of American income earners will get 67 percent of the tax cut.