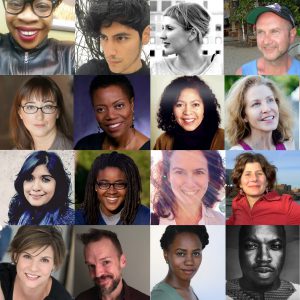 “The five panels have selected an incredible cohort of visionary playwrights and theatermakers,” says Jeremy B. Cohen, Producing Artistic Director of the Playwrights’ Center. “I’m proud we can offer ongoing support to some artists who have been in the Playwrights’ Center fold for a while, as well as welcome many writers to the Center for the first time. It’s also significant that 78% of our incoming roster for next year are female artists, including all seven incoming Core Writers.”

The 2017-18 recipient is Mfoniso Udofia, who is writing a nine-play Ufot Family play cycle, of which “Sojourners” and “Her Portmanteau” are running in repertory now at New York Theatre Workshop. Udofia’s commissioned play for the McKnight National Residency and Commission is a new play in the Ufot cycle. She is also translating Shakespeare’s “Othello” for Oregon Shakespeare Festival’s Play on! Project.

The 2017-18 McKnight Fellows in Playwriting are:

The 2017-18 McKnight Theater Artist Fellows are:

Fellowships at the Playwrights’ Center, made possible by the McKnight and Jerome foundations, provide more than $325,000 each year to support 13 to 14 fellows and mentees. In addition, the Center serves as an artistic home for 25 to 30 Core Writers on three-year terms. All fellows and Core Writers are selected by independent panels of theater professionals.

The Playwrights’ Center also supports close to 2,000 member playwrights around the world and runs a robust series of partnership programs building relationships between playwrights and producing theaters.