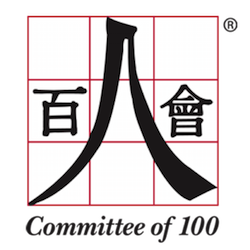 New York (June 2, 2017) — The Committee of 100 — an organization focused on U.S.-China relations and Chinese American advancement — on Friday commended U.S. Senate confirmation of former Iowa Governor Terry Branstad as U.S. Ambassador to China.
Ambassador Branstad, who was honored at the C100 Annual Conference 2017 in Washington, D.C. for his work in reinforcing the important role of states in supporting the U.S.-China relationship, resigned as governor of Iowa and was sworn-in last week.
Branstad has a long-standing and personal friendship with Chinese President Xi Jinping dating back to the 1980s. Branstad was recognized at the C100 Awards Gala Dinner on May 18, 2017, for his contributions as governor of Iowa to furthering U.S.-China relations. His son, Eric Branstad, represented his father, who was unable to attend due to his pending official confirmation by the U.S. Senate. The theme of the C100 Annual Conference 2017 was “Seeking Common Ground.” Conference Co-Chairs included Bob Gee, Charlie Woo, Benjamin Wu, and Frank H. Wu.
“I will work tirelessly to represent America and her citizens to the best of my ability,” Branstad stated to the Senate Foreign Relations Committee during his confirmation hearing. “I will champion American interests in China with as much fervor and dedication as I have championed Iowa’s interests during my more than 22 years as governor.”
“We congratulate Ambassador Branstad and look forward to working with him to address the key macro-economic and geopolitical issues affecting U.S.-China relations, while building awareness of the issues that affect Chinese Americans here at home,” said C100 Chairman Frank H. Wu.
Wu said that he and C100 leaders will provide Branstad with a newly-released landmark survey, “U.S. China Public Perceptions Survey 2017,” to help policymakers and key influencers in both countries find paths to mutual understanding on major issues. C100 Survey Chair Charlie Woo and other C100 leadership members briefed bipartisan members of the U.S. Congress, as well as State Department and White House high-level staff about the survey findings in advance of its public release.
“The study illuminates the hopes and fears of Americans and Chinese people, as well as opportunities and challenges in U.S.-China relations; it can be used to foster more fact-based dialogue and decision making,” said Woo.
Over 500 business, government, academic, entertainment, and media representatives attended the three-day conference to talk about improving the bilateral relationship between the U.S. and China, cybersecurity, foreign policy, media, and the economy, among other topics.
Speakers included U.S. Cabinet Secretary Ben Carson, who brought regrets and warm greetings from Wilbur Ross, U.S. Commerce Secretary, who had been scheduled to deliver the keynote address during the C100 Full-Day Summit on May 19, 2017.
Carson, a famed surgeon before entering politics, delivered a strong message of hope and inclusion that was very well-received by C100 audience members. “I think there’s an opportunity for China and the U.S. to become very good friends – and the administration is looking for that,” Carson said.
Carson said Secretary Ross was called by U.S. President Donald Trump to participate in his first overseas trip since assuming office. C100 leadership and members applauded Secretary Ross on this invitation of such stature, and said they look forward to a debriefing upon his return.
Secretary Ross has been instrumental in negotiating a recently announced U.S.-China trade agreement that many see as a significant step in opening China’s vast markets to U.S. beef, liquefied natural gas, and more. In return, the U.S. would allow China to export poultry to U.S. consumers. China’s import of natural gas would help reduce its dependence on coal and combat its burgeoning air pollution problem. The 10-part agreement stems from the successful meeting between China’s President Xi and President Trump in April 2017.
The two countries, representing the world’s two largest economies, will hold high-level talks to work on a one-year plan to follow up on the breakthrough negotiations.
Another influential speaker was U.S. Senator Dan Sullivan (R-AK), who spoke at the C100 Full-Day Summit, Friday May 19th, and serves as Co-Chair of the Senate’s China Working Group, a bipartisan panel that helps frame U.S.-China policy. “Some say the U.S. should contain China. I don’t think this is the right strategy,” Sullivan said.
To kick off the conference, entertainers Abigail Washburn and Wu Fei performed on Thursday, May 18, 2017 at the C100 Awards Gala Dinner, and members celebrated co-founder I. M. Pei’s 100th birthday. Other gala speakers included: Ambassador Cui Tiankai, who was also honored by C100 alongside Branstad for his service as Chinese Ambassador to the United States; Bloomberg’s Betty Liu, who served as Emcee; U.S. Representative Judy Chu (D-CA), Chair of the Congressional Asian Pacific American Caucus and a member of the House Ways and Means Committee; and U.S. Representative Ed Royce (R-CA), Chair of the House Foreign Affairs Committee.
“China is ready to work with all parties, including the United States, to translate these grand ideas into reality,” stated Ambassador Cui.
U.S. Representative Ted Lieu (D-CA) also spoke at the Full-Day Summit, sitting down with Woo for a fireside chat about his career in public service, from the military to the U.S. Congress.
Prior to the Annual Conference, C100 members welcomed other Asian American legislators to a Capitol Hill reception. U.S. Senator Tammy Duckworth (D-IL), U.S. Rep. Grace Meng (D-NY), and Rep. Chu all stopped by to share remarks and meet with C100 members.
The C100 Annual Conference 2017 was made possible by a committed group of generous sponsors, which included: Oscar Tang, H. Roger Wang, J.T. Tai & Co. Foundation, Wallace H. Coulter Foundation, Kenson Ventures LLC, United Airlines, and Akin Gump Strauss Hauer & Feld LLP, amongst others.
The Committee of 100 is an international non-partisan leadership organization of prominent Chinese Americans in business, government, academia, and the arts. For over 25 years, the Committee has been committed to twin missions of promoting the full participation of Chinese Americans in all fields of American life, and encouraging constructive relations between the peoples of the United States and Greater China. http://www.committee100.org/