Lao American writer Saymoukda Duangphouxay Vongsay, is among the guests of honor scheduled to attend CONvergence 2017, the weekend of July 6-9 at the DoubleTree by Hilton Hotel in Bloomington, Minn.

Established in 1999, CONvergence is an annual convention for fans of science fiction and fantasy of all media. The four-day event draws more than 6,000 guests and among the premiere events of its kind in the upper Midwest. Vongsay, who resides in Minneapolis, joins fellow guests of honor, Lois McMaster Bujold, Kristopher Carter, Norman Cates, Eric Chu, Tracee Lee Cocco, Naomi Kritzer, Seanan McGuire, Jai Nitz and Ian Truitner.

A member of both the Science Fiction and Fantasy Poetry Association and the Horror Writers Association, Saymoukda Duangphouxay Vongsay is an award-winning Lao American poet, speculative fiction playwright, and experimental cultural producer whose work is focused on creating tools and spaces for the amplification of refugee voices. She is the creator of the play Kung Fu Zombies vs. Cannibals, and her Kung Fu Zombie-verse and other plays have been presented by the Smithsonian Asian Pacific American Center, Theater Mu, and the Consortium of Asian American Theater Artists. Her writings can be found on coffee sleeves, along metro transit lines, and in literary and academic journals and anthologies.

The theme for CONvergence 2017 is To Infinity & Beyond, a celebration of all things space opera. The convention will feature a variety of local and national guests, along with community-driven panels and other programming, as well as live music and DJ dances, the Harmonic CONvergence Performance Space, a costume contest and film screenings, anime, an art show, auction, and dealer’s room, as well as games and activities for participants of all ages. Interested individuals can visit http://www.convergence-con.org for more details. 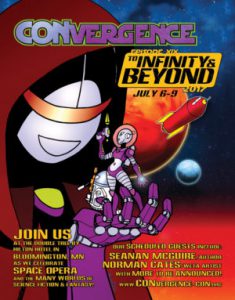 The organizers discussed this year’s theme noting “Whether the hero is fated to a mythic destiny through blood or prophecy, or simply an average galactic citizen caught up in incredible circumstance, their adventures satisfy our hunger for the optimistic triumph of the individual and the common good.” further adding “Set against the backdrop of space and futuristic technology, space opera offers us universes that feel real, fantastic, and of mythic proportion for struggles that promise everything in your wildest dreams.”