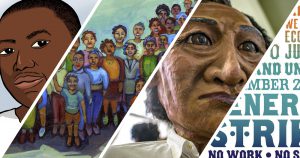 MINNEAPOLIS (May 7, 2017) — PoliGraphix Art Collective and the Minneapolis workers’ center CTUL announces the group exhibition General Strike / Huelga General — an art show in celebration of strikes, protests, and popular resistance, with an Opening Reception on Friday, May 12, from 6 to 10 p.m. at 3715 Chicago Avenue South, Minneapolis, MN 55407.

This exhibit explores the theme of a general strike from social, political, and labor perspectives, and also serves as a platform for artists to imagine visions of civil disobedience on a mass scale. On May 1 of this year, CTUL and other social justice and labor organizations locally and across the country participated in a day of action for immigrant and workers’ rights, which included strikes, rallies, and protests. In celebration of these actions, as well as the various other mass actions this year — the women’s marches, the day without an immigrant, etc — more than 40 artists, mostly local, but also from across the nation, are exhibiting their paintings, prints, puppets, posters, photography, and more.

Hosted by CTUL (Centro de Trabajadores Unidos en Lucha), Minnesota’s largest workers’ center, the exhibit will bridge May Day (May 1) and Labor Day (September 4), the two most important workers’ holidays. The public is invited to the opening reception. In addition to work by renown national and local artists, some of the banners, posters, and puppets made for the May 1st actions, as well as for the May Day Parade will be included in the exhibit.

The event will also include performances by the “Palabristas”, a Twin Cities-based Latinx poetry group, including Teresa Ortiz, Neri Diaz, David Mendez, Emmanuel Ortiz, Marion Gomez, Magdalena Kaluza, and La Lupe.  The exhibit will run through the summer, but some interactive pieces will only be exhibited on opening night.  This event will also serve as a fundraiser for CTUL’s brand new “Community Arts & Power Project,” which invites working artists to collaborate with ongoing labor and community organizing campaigns.

Starting on Monday, May 15, the exhibit will be open to general viewing during normal business hours 10 a.m. to 5 p.m., Monday through Friday.  Additional events and gatherings will be scheduled throughout the summer.  A closing reception (date and time TBD) will be scheduled in September.

This exhibit will run concurrently with the painting of the “Twin Cities Worker Solidarity Mural” on the outside of the building. Aaron Johnson-Ortiz is the lead artist on this mural project, and there will be community paint days scheduled throughout the summer for local community members to come and help paint, and also to participate in a guided tour of the art exhibit.

Sandra Spieler, Heart of the Beast Puppet and Mask Theater

Lindsay McCaw, Heart of the Beast Puppet and Mask Theater