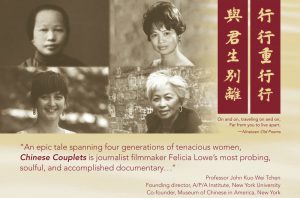 Part memoir, part history, part investigation, Chinese Couplets is the filmmaker’s search for answers about her mother’s emigration to America during the Chinese Exclusion era. The film reveals the often painful price paid by immigrants who abandoned their personal identity, the burden of silence they passed on to their off spring and the inter-generational strife between immigrants and their American born children.

Felicia Lowe is an award-winning independent television producer, director, and writer with more than 35 years of production experience. Lowe received an EMMY for Best Cultural Documentary for Chinatown: The Hidden Cities of San Francisco. The lively hour-long piece on the history of San Francisco’s oldest neighborhood has been broadcast numerous times on PBS. Other relevant works include Carved in Silence, a documentary about the experiences of Chinese immigrants detained on Angel Island Immigration Station and “China: Land of My Father”. Her innovative works have screened in film festivals, museums and are used in classrooms across the country. A descendant of Angel Island detainees, she has been actively involved in the preservation of the Angel Island Immigration Station.