Sadako was only two years old when the bomb fell and seemed to be unharmed, but at twelve she was diagnosed with “radiation sickness” an aftermath of the bomb’s effects. With boundless optimism, she takes an old story to heart: If a sick person folds a thousand paper origami cranes the gods will grant her wish and make her well again. She begins to fold her thousand cranes.

Before Sadako is able to complete her task, she is visited by her Grandmother who lovingly carries her on the back of a glorious crane … to the land of a thousand, thousand spirits. There she joins her ancestors and learns that her true wish may be granted. Her friends and classmates finished Sadako’s work. They folded enough cranes to make a thousand.

Today children in Japan and all over the world fold a thousand cranes and lay them at the feet of Sadako’s statue in the Hiroshima Peace Park. Their wish is engraved at the bottom of the monument: “This is our cry, This is our prayer, Peace in the world.”

Sarah Tan of Singapore plays Sadako Sasaki the girl who was two years old when an American atomic bomb was dropped on Hiroshima. Ki Seung Rhee of St. Paul plays Sadako’s father and Kenji, her friend. Catrina Huynh-Weiss of Minneapolis plays Sadako’s mother and the spirit of Sadako’s Grandmother who guides her in hope for peace.

A Thousand Cranes was written by Kathryn Schultz Miller, directed by Kathy Welch, with musical composition by Miriam Gerberg. Drawing upon over a decade of study of traditional Japanese performing arts, Welch directs the cast in this production which includes dance, stylized movement and mask-work.
Gerberg, an ethnomusicologist, works with world musics includes a specialty in Middle Eastern musics, including performing classical Arabic music, Japanese koto and Javanese gamelan. As a composer she has been commissioned to write works for chamber orchestra, improvisational ensembles, opera, music theater, chamber instrumental and vocal, dance and video. 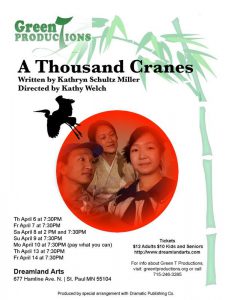 The play runs 60 to 75 minutes with no intermission. The age recommendation is 7 and older.