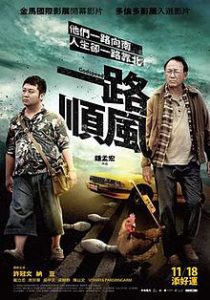 Screened at the 36th Minneapolis St. Paul International Film Festival in the Asian Frontiers program, the Taiwan movie “Godspeed” is an interesting blend of violent crime feature and soul searching road movie. Helmer Chung Mong-hong has delivered a stylish production not only as writer and director but cinematographer as well.

Hong Kong veteran actor and comedian Michael Hui shines in his portrayal of taxi driver Old Xu, picking up a fare, no, persuading Na Dow (Na Dou Lin) to get into his taxi, oblivious that the young man is making a delivery of drugs from Taipei all the way down to the south of the country. No matter, Old Xu is eager to make a few more bucks even when he should be back home resting after a shift.

Here we see Chung’s luminous cinematography as he leads us on a car ride through Taiwan’s highways and byways, a journey that leads us into the soul of two unlikely travel companions caught in a drug war. Their deadpan interactions exude nuanced humour, and Xu’s monologues are one man’s pondering of life and fate. Hui has shown that he can be effective in delving into the serious through his seemingly lighter façade.

At the recent Hong Kong Film Awards on April 9th, “Godspeed” won Best Picture in the category of Films Across the Two Coasts, Mainland and Taiwan. This Fargo-esque feature confirms the acclaimed Chung as a notable director to watch.