Merced, Calif. (April 14, 2017) — This month, Lao American writer Bryan Thao Worra will be a Visiting Artist at the University of California Merced thanks to the UC Merced Center for the Humanities.

Thao Worra will be working with the community throughout April conducting workshops, readings, trainings, and community conversations of the nature of poetry and writing, and techniques to capture stories that reflect both the history and dreams of the Central Valley. Throughout the month on Wednesdays, he will be holding open office hours for emerging and established writers to discuss their projects and manuscripts.

Thao Worra has a strong connection to the Central Valley. The newly-elected president of the 40-year old Science Fiction Poetry Association. he came to the US in 1973 as the adopted son of an American pilot and rediscovered his long-lost Lao family living in Modesto in 2003 after 30 years. Last year he was a novice monk briefly at the Ceres Buddhist temple his family attends. This year Thao Worra’s first book of poetry, On The Other Side of the Eye turns 10 in August (and notably featured the Naga from the Ceres temple on the cover.) Many of his poems are set in the Central Valley, often addressing his family reunification and the search for his heritage, as well as the traditional ghosts, legends, and myths of the Lao culture as they are expressed in America today.

“I’m very honored to be a part of this project, one of the first to have a chance to work with the community like this with the UC Merced Center for the Humanities,” Thao Worra said. “I have events that will take place both on the UC Merced campus and off-site, particularly at the Merced Multicultural Arts Center.”

This is a rare occasion for Thao Worra whose work across the country has not often allowed him to work with the Central Valley community for extended periods of time.  In the coming months ahead his travels will include Seattle, Philadelphia, Houston, Minneapolis, Lowell, and Chicago, although he hope to return to the Central Valley later this year.

An award-winning Laotian American writer, Thao Worra works actively to support Laotian, Hmong and Southeast Asian American artists. He has the distinction of being the first Lao American to hold a National Endowment for the Arts Fellowship in Literature for his poetry, in addition to over 20 other awards for his work, including service as a Cultural Olympian representing Laos during the 2012 London Summer Games. The author of 6 books, his work appears internationally including Australia, Canada, Scotland, Germany, France, Singapore, Hong Kong, Thailand, Korea, and Pakistan. He was a founding chair of the National Lao American Writers Summit, and my work has been featured in numerous projects by the Smithsonian Asian Pacific American Center, among others. 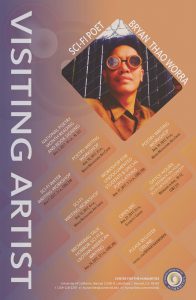 The University of California, Merced, is the tenth and newest of the University of California campuses. It is located in the San Joaquin Valley in unincorporated Merced County, California, near Merced just north of Fresno, California. The UC Merced Center for the Humanities is committed to stimulating individual and collaborative research and scholarly work which explores both human experience and human consciousness, as well as the cultural products – art, literature, music, material culture – that record, reflect, and express them. For more information on Thao Worra’s schedule while in Merced visit: http://centerforhumanities.ucmerced.edu.