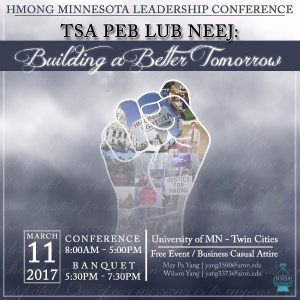 200 Syndicate Street North, St. Paul, MN 55104
When Mai Neng Moua decides to get married, her mother, a widow, wants the groom to follow Hmong custom and pay a bride price, which both honors the work the bride’s family has done in raising a daughter and offers a promise of love and security from the groom’s family. Mai Neng, who knows the pain this tradition has caused, says no. Her husband-to-be supports her choice.

What happens next is devastating, and it raises questions about the very meaning of being Hmong in America… (read more here) 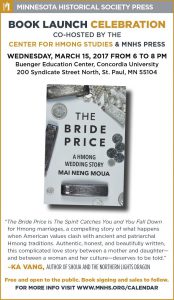 Good Muslim, Bad Muslim: Resistance and Comedy in a Time of Uncertainty

Join us for an afternoon full of conversations, laughter, and social justice! Taz Ahmed and Zahra Noorbakhsh, co-hosts of the #GoodMuslimBadMuslim Podcast, will be performing a live show featuring stand-up comedy, dialogue, and storytelling. They will be sharing their experiences of activism, comedy, and combating Islamophobia. A facilitated Q&A will occur immediately after the interactive lecture. 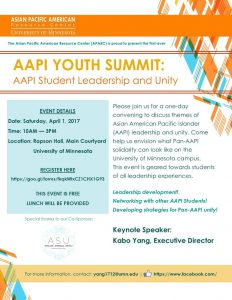 89 Church St SE, Minneapolis
Please join the Asian Pacific American Resource Center (APARC) for the first-ever AAPI Youth Summit at the University of Minnesota! This year’s theme is “AAPI Student Leadership and Unity”, and seeks to bring together AAPI students from across campus to discuss what Pan-AAPI solidarity can look like at the University of Minnesota. This event is geared towards students of all leadership experiences, whether they are currently serving on a student organization board, considering running for a board position, or are just interested in learning more about leadership. This summit will include opportunities for networking and workshops on issues including: leadership, Pan-AAPI organizing, storytelling as a tool for social justice, self-care for ourselves and our community, and more! 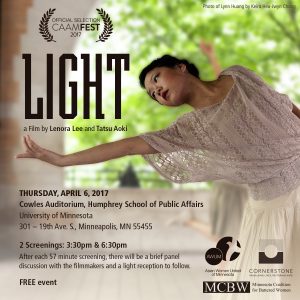 Hosted by Asian Women United, LIGHT is a film in which dance, memory, music, and poetry collide in a visual and aural landscape; a meditation on women being propelled into the unknown by courage and faith to risk their lives and everything they have for freedom. 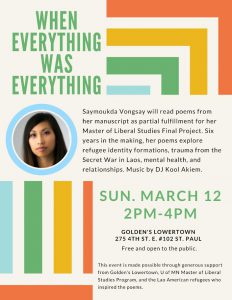 How did the daughter of a provincial governor and the daughter of a buffalo-riding gangster become BFFs? The Friendship Play is a comedy-turned accidental musical about real-life BFFs May Lee-Yang (a Hmong refugee) and Saymoukda Duangphouxay Vongsay (a Lao refugee). Set to the backdrop of karaoke music and Little House on the Prairie fantasies, Lee-Yang and Vongsay hack their way through stories about refugee life, American pop culture, and empowering their brethren through the Hot Asian Man project. This performance is part of the Power and Privilege Series sponsored by the University of Minnesota’s Office of Student Affairs. Free. Reserve your tickets here.

Bring your lunch, watch the film, join the conversation.

Guthrie Theater
818 South 2nd Street, Minneapolis, MN 55415
Celebrate 20 years of Mu Daiko with guest artists from Japan, Canada and the U.S. Daytime activities are free to the public. Headlining the festival is Mu Daiko’s 20th Anniversary Concert featuring an amazing roster of guest artists, Mu Daiko favorites, and world premiere pieces.
A limited number of special VIP tickets include a pre-show reception with guest artists and preferred seating. All other seating will be general seating only. Tickets ($20 students, $40 adult, $60 VIP) can be purchased here.

U of MN Recreation and Wellness Center, Multi Purpose room 7