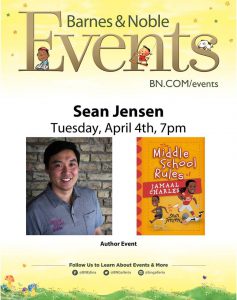 The Middle School Rules of Jamaal Charles features the stories and lessons of Jamaal’s childhood, defined by people overlooking him. Young readers will see how Jamaal deals with bullying and endures teasing because of his undiagnosed learning disability.

Jensen will answer questions, sign books and discuss the challenges he faced as an Asian American journalist and author. Appetizers will be provided at a mixer following the event sponsored by the Asian American Journalist Association — Minnesota chapter.

As a boy, Jensen delivered the Boston Globe and passionately tracked sports pages throughout the country. But he quickly recognized few of the sportswriters he liked looked like him. Undeterred, he resisted his parents’ push toward engineering and studied journalism at Northwestern University. By age 24, Sean was the youngest lead NFL beat writer for a major newspaper in the United States.

After 16 years of covering the NFL, he created “The Middle School Rules” book series and speaks to children about the importance of discovering and pursuing their own dreams with grit and relentlessness.