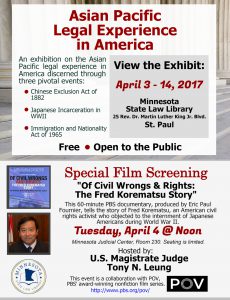 St. Paul, Minn. (March 21, 2017) – In early April, members of the public are invited to the Minnesota State Law Library in St. Paul to view a traveling exhibit detailing the legal history of Asian Pacific peoples in the United States through three pivotal events:  the Chinese Exclusion Act of 1882, the Japanese American Incarceration during WWII, and the Immigration and Nationality Act of 1965.

The exhibit, “Asian Pacific Legal Experience in America,” will be available for free, self-guided tours at the Minnesota State Law Library from Monday, April 3 through Friday, April 14, 2017.

During the exhibition, the Minnesota State Law Library will host a special screening of the PBS film, Of Civil Wrongs And Rights: The Fred Korematsu Story on Tuesday, April 4, at noon. The 2001 documentary details the 40-year legal fight to vindicate Fred Korematsu, a civil rights activist who resisted the internment of Japanese Americans during World War II. The screening will be introduced by United States Magistrate Judge Tony N. Leung. Judge Leung became the first Asian-American judge in Minnesota when he was appointed to the Hennepin County District Court bench in 1994, and subsequently became the first Asian-Pacific American to serve on the federal bench in the state in 2011.

The film screening is free and open to the public, though seating may be limited. The film runs for 60 minutes. Attendees are welcome to view the “Asian Pacific Legal Experience in America” exhibit before or after the film screening.

The Minnesota State Law Library is located on the ground floor of the Minnesota Judicial Center at 25 Rev. Dr. Martin Luther King Jr. Blvd. in St. Paul. The Library and exhibit are open from 8:30 a.m. to 5 p.m., Monday through Friday.

A poster featuring all the details of the exhibition and film screening is available here.