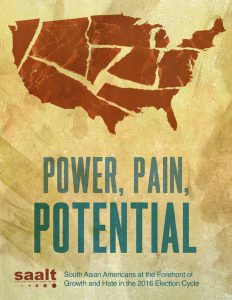 Takoma Park, Md. (Jan. 11, 2017) — South Asian Americans Leading Together (SAALT), a leading national South Asian American advocacy organization, released “Power, Pain, and Potential,” the first comprehensive report documenting hate violence and xenophobic political rhetoric aimed at South Asian, Muslim, Arab, Sikh, Hindu, and Middle Eastern Americans during the 2016 election cycle.
This report examines the dramatic demographic growth of South Asians across the United States, particularly in the South, and reveals how increases in population are met with increases in intolerance during the most divisive Presidential election in modern American history.
“The unprecedented violence we saw following the September 11 attacks has returned, electrified by a hostile 2016 presidential election,” stated Suman Raghunathan, Executive Director of SAALT.  “With over 4.3 million South Asians in the US, policymakers must make it a first priority to address and dismantle the paradox of our communities living at the intersection of growth and hate.”
From Nov. 15, 2015 to Nov. 15, 2016 (between the Paris attacks and the week after the Presidential elections), SAALT documented 207 incidents of hate violence and xenophobic political rhetoric aimed at our communities in an online public database, a 34% increase in less than a third of the time covered in our 2011-2014 report, “Under Suspicion, Under Attack.”
This disturbing data breaks down to 140 incidents of hate violence and 67 instances of xenophobic political rhetoric during the 2016 election cycle.  An astounding 95 percent of incidents were motivated by anti-Muslim sentiment.  SAALT’s findings are consistent with the FBI’s 2015 hate crimes statistics, which revealed a 67 percent increase in hate crimes against Muslims from the previous year. Notably, President-elect Trump was responsible for one in five (21 percent) xenophobic political statements SAALT documented.
Against the backdrop of this hostility and the resurgence of white supremacist organizations nationwide, South Asian Americans are the most rapidly growing demographic group in the nation.  The largest population growth occurred in the South, where 30 percent of South Asians currently reside: an increase from half a million to one million since 2000.  Thirty percent of the hate violence incidents we catalogued occurred in the South.
This report also offers policymakers crucial and comprehensive recommendations to address hate crimes underreporting, improve relations between our communities and law enforcement, dismantle policies that promote racial profiling and surveillance, and shift immigration policies to respect and meet our communities’ needs.  The new administration must make these recommendations a first priority in order to heal our deeply divided country.  Anything less will make the transition of power on January 20 simply a transition of pain for our communities.