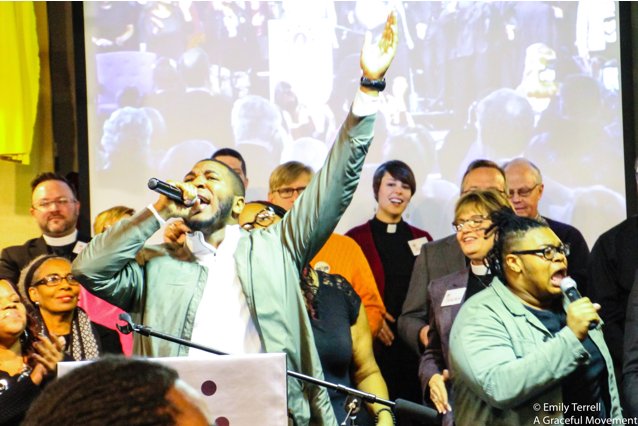 MINNEAPOLIS (Jan. 30, 2017) — This weekend, over 2,000 people from across Minnesota gathered to proclaim their commitment to democratic and moral values through the lens of Prophetic Resistance.

The Saturday event packed out Shiloh Ministries International Temple, an overflow room and an additional satellite site at New Creation Church in North Minneapolis. This occasion was hosted by ISAIAH, a faith-based, nonpartisan organization of over 100 Minnesota faith communities dedicated to racial and economic justice.

The crowd was comprised of 180 faith communities from Greater Minnesota, the Twin Cities, and surrounding suburbs. Additionally, 30 Minnesota-based, privately owned daycare centers were represented by the owners, staff, children they service and their parents. Minneapolis Mayor Betsy Hodges, Golden Valley Mayor Shep Harris, and Maplewood Mayor Nora Slawik were among the crowd. Both Northfield Mayor Rhonda Pownell and U.S. Sen. Al Franken were presented with questions and an opportunity to say how they will respond in this moment of sociopolitical and moral uncertainty among local and national leaders.

In an affirmation of Senator Franken’s Jewish roots and commitment to social justice he quoted Rabbi Max Shapiro, “It’s not enough to be just. You must DO justice.”

The primary focus of the event was solidifying the call that all humanity as sacred creation must be accountable to one another and be willing to work for a better future for all. “We are family. If one bleeds, we all bleed,” said Rev. James Alberts of Higher Ground Church in St. Cloud and president of ISAIAH.

Rev. Todd Lippert of First United Church of Christ in Northfield spoke on the necessity of ‘Sanctuary’ in our country, cities and churches. He emphasized the need for more congregations and local officials to, “cast a communion table-vision in your own cities where all are actually welcome!”

Energy was high as speakers from the Christian, Muslim and Jewish traditions presented. Personal testimonies and heartbreaking stories revealed the massive impact political policies have on everyday working families. The very real threats to democracy and morality were laid out by faith leaders and Doran Schrantz, ISAIAH executive director.

Notably, the American Dream of a democratic republic has come with struggle. America’s tumultuous history, including the attempted genocide of indigenous people, chattel slavery, Jim Crow and the much more recent moral, ethical and questionably legal violations, have left many wondering if the dream is possible.

Prophetic Resistance is a response in the affirmative. It says that people of faith will not acquiesce to the hate and tyranny being unleashed in the nation. Instead, faith communities will answer to the call of moral citizenship. This call draws a definitive line when combating the dangerous lack of integrity in the current political climate. This moral citizenship transcends political parties, and focuses on the priorities, people.

“Our Prophetic Resistance is both defense and offense,” Schrantz said. “At the heart of it, this is the very reason for ISAIAH. I think perhaps everything we have done together for the past 20 years has maybe just been preparing us for this time, these times. We were called for such a time as this.”

Over 2,000 participants committed to 100 Days of Prophetic Action. For the next 100 days, people of faith across Minnesota will perform various actions in fighting for the protection of people, the planet and democracy. These actions will cover a broad spectrum of reach as some acts will be on the individual level, like posting on social media, writing letters to editors and public officials or offering prayers. Others will be congregational, such as hosting public forums and trainings in their places of worship.

Still other actions will be organizational, state, and nationwide by attending major actions, vigils, rallies and press events.  Each person makes a daily commitment to fight for moral issues like affordable healthcare or education reform and against immoral agendas that include, predatory lending or the for-profit prison industrial complex. As people of faith and moral citizens, it is imperative to be constantly and consistently engaged in the sociopolitical arena. Voting is the minimum level of civic participation. The real work has begun.

Sunday, officially Day 2 of the 100 Days of Prophetic Action, in solidarity with the surge of protesters, Schrantz joined Senators Amy Klobuchar and Franken at a press conference to reject the Muslim Ban and support the courageous work of advocates, attorneys, public officials, protestors, and civil servants. ISAIAH also released a statement saying, “We are guided by our faith to love God and love our neighbors – the two cannot be separated. We fiercely condemn any attempt to block people seeking refuge from entering the country. More than 65 million people are currently displaced from their home – fleeing persecution and horrific violence. This executive order stands in direct opposition of what it means to be an American and what it means to be a convicted person of faith.”