LOS ANGELES (Dec. 9, 2016) — The U.S. Census Bureau released the new official list of jurisdictions that are required to provide bilingual voting assistance under Section 203 of the federal Voting Rights Act.

“Section 203 breaks down language barriers by allowing voters to understand and participate in the election system, but proper implementation is critical its success,” said Terry Ao Minnis, director of census and voting programs at Advancing Justice | AAJC. “Advancing Justice will be working with community groups and election officials to ensure that Section 203-covered jurisdictions provide robust language assistance to limited English-speaking voters.”

“The addition of counties covered for Asian languages in California, Massachusetts, Texas, and Virginia reflects the growth of Asian American communities in various sections of the United States,” said Deanna Kitamura, voting rights project director at Advancing Justice-LA. “However, we are disappointed in the loss of coverage for five language groups: Hindi, Japanese, and Thai in Los Angeles County, Japanese in Honolulu County, and Filipino in Maui County. Many voters in these areas have relied on language assistance for years.  We have raised concerns about the loss of languages with the election official in Los Angeles and will be working with local groups to assess language access needs and advocate for voluntary coverage where warranted.”

Section 203 requires jurisdictions to provide language assistance if the number of eligible voters qualifying for such assistance meets certain threshold tests. Based on American Community Survey data, the Census Bureau determines those thresholds through an ongoing and in-depth survey that it sends to households to collect detailed data on the American population. Language assistance must be provided both before and on Election Day. Language assistance covers a multitude of areas including translated written materials, such as sample ballots, ballots and signage, bilingual assistance at poll sites, and publicity of the availability of language assistance to the covered language community. 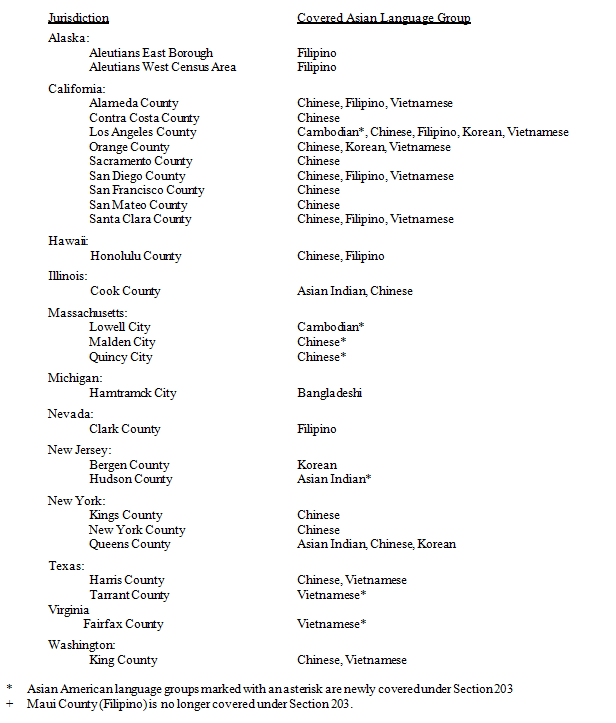