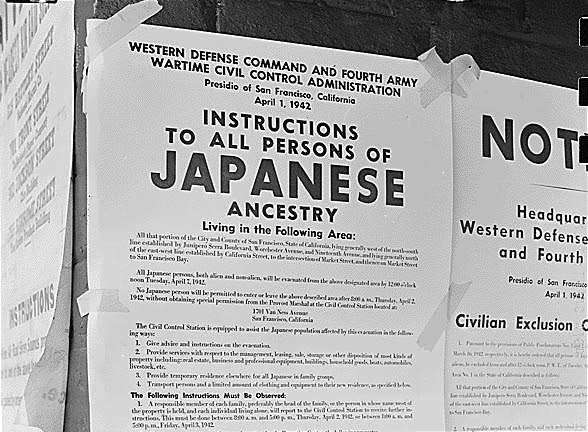 WASHINGTON, D.C. (Nov. 16, 2016) — Various Asian and Pacific Islander groups denounced the plan to institute a “Muslim registry” and the appeal to the unconstitutional Japanese American incarceration during WWII as a possible grounds for justification of the registry.

This Wednesday on Fox News, Carl Higbie spoke out in favor of a “Muslim registry” that would maintain a list of Muslim immigrants in order to track their activities for the purported reason of stopping terrorism. This idea was originally proposed by Kris Kobach, an anti-immigrant lawmaker who claims to be advising President-Elect Trump on his transition team.

Higbie, a spokesman for the Make America Great Again PAC and a campaign surrogate for Trump, told host Megyn Kelly in discussing the legality of such a program, “I know the ACLU is going to challenge it, but I think it will pass. We’ve done it with Iran back a while ago. We did it during World War II with Japanese. Call it what you will, maybe wrong.”

“The idea of a Muslim registry is inherently discriminatory and antithetical to American values of equality and fair treatment under the law,” said Leslie Moe-Kaiser, OCA National President. “This program would not only single out innocent people based on their religion for wrongful prosecution and deportation, but also would be ineffective in stopping terrorism.

Carl Higbie’s invocation of one of the most shameful episodes of Asian American history as ‘precedent’ for this registry is a prime example of why we, as Asian Americans and Pacific Islanders, must be ever vigilant in preventing a repeat betrayal of the Constitution, Moe Kaiser added. Any effort to rewrite history that revives the grossly misguided ‘necessity’ of the internment camps is an insult to the memory of the 120,000 Americans of Japanese descent wrongfully incarcerated during WWII, she said.

“If President-Elect Trump really will be a President for all Americans, then he must disavow Carl Higbie and Kris Kobach,” she said. “He must also immediately condemn the idea of any kind of registry that singles out residents based on their ethnicity, religion, national origin, or other identity.”

Lleaders of the Congressional Asian Pacific American Caucus (CAPAC) released the following statements condemning comments by supporters of President-elect Trump who cite Japanese American internment camps as a “precedent” for the creation of a Muslim registry.

U.S. Rep. Judy Chu (CA-27), CAPAC chair, said that any proposal to force American Muslims to register with the federal government, and to use Japanese imprisonment during World War II as precedent, is abhorrent and has no place in our society.

“These ideas are based on tactics of fear, division, and hate that we must condemn,” Chu said. “The incarceration of innocent Japanese Americans due to wartime hysteria and racism was a dark chapter in our nation’s history which led to civil rights violations so unconscionable that Congress later apologized for it. Like Japanese incarceration, imposing a registry upon American Muslims goes against our constitutional values and our very principles as a nation. We will remain vigilant and push back against the creation of any such registry, and implore the President-elect to recognize the basic civil and constitutional rights of all Americans.”

U.S. Rep. Madeleine Bordallo (GU), CAPAC vice chair, said that even the suggestion of a Muslim registry, and likening such a registry to the internment of thousands of Japanese Americans during World War II is dangerous and recalls one of our nation’s darkest spots in recent history.

“Recognizing the wrongdoing, we officially apologized to the Japanese Americans who were interned, when President Ronald Reagan signed into law the Civil Liberties Act of 1988, saying that it reaffirmed ‘our commitment as a Nation to equal justice under the law,’ Bordallo said. “We should not let misguided fear undermine our constitutional protections for religious freedom and lead us back down this dark path. Let us remain vigilant to not repeat the grievous mistakes of our nation’s past.”

“This is fear, not courage. This is hate, not policy. President Reagan, himself, called our internment a ‘failure of political leadership.’ This does not make American great but would take us back to the bigotry of the 1940s,” Honda said. “The Trump administration is showing they have not learned from our history when they suggest we go back to one of its darkest chapters. No one should go through what my family and 120,000 innocent people suffered regardless of their race or religion or any other way they would choose to try and divide us. I fought such divisive practices after 9/11 to ensure Muslims would not be unfairly targeted just as we were. Now today, I tell Mr. Trump that to reenact a policy fueled by prejudice is uncivilized, un-American and unworthy of a president sworn to uphold our Constitution.”

U.S. Rep. Mark Takano (CA-41), CAPAC whip, said the imprisonment of thousands of Japanese-Americans during World War II, including his own parents and grandparents, is widely understood to be one of the darkest chapters in American history.

“I am horrified that people connected to the incoming Administration are using my family’s experience as a precedent for what President-elect Trump could do,” Takano said. “These comments confirm many Americans’ worst fears about the Trump Administration, and they reflect an alarming resurgence of racism and xenophobia in our political discourse. I call on the President-elect to immediately disavow these comments and begin the work of healing our nation’s divides.”

U.S. Sen. Mazie Hirono (D-HI) said the internment of Japanese-Americans during World War II was a historic injustice and nothing like it should ever happen again.

“The protection of our Constitution is not conditional; it applies to all of us,” Hirono said. “We cannot allow hate speech, racism, and anti-immigrant sentiment to become the new norm in our country, and we must continue to speak out against hate and prejudice. An inclusive and vibrant America is worth fighting for.”

“The internment of Japanese-Americans is one of the darkest moments in our nation’s history and should not be used as a model for action by the federal government, as Mr. Higbie suggests. President-elect Trump not only needs to immediately condemn Mr. Higbie’s remarks, he also must repudiate the idea of a ‘Muslim registry’, which is a bigoted idea espoused by presidential transition advisor Kris Kobach,” Lieu said. “President-elect Trump must demonstrate that he is the President for every American, not just the alt-right.”