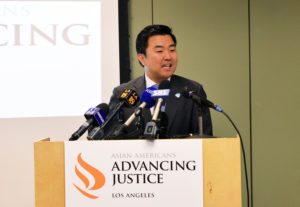 “This November, Californians and Angelenos have the opportunity to cast their ballots on policies that will impact our children’s futures,” said Los Angeles City Councilmember David Ryu. “Too many people take their right to vote for granted. But for me and many immigrants, voting is more than a privilege — it’s a responsibility.”

In collaboration with Kore Asian Media and Asian Americans Advancing Justice-Los Angeles, Councilmember Ryu produced a new get-out-the-vote video titled “Kids Save the Day,” featuring Hudson Yang, Forrest Wheeler, and Ian Chen from ABC’s Fresh Off The Boat, Ally Maki and Asif Ali from TBS’s Wrecked, Sydney Viengluang from Syfy’s Z-Nation, and Jona Xiao from Keeping Up With The Jonesesand Spiderman: Homecoming. The video encourages California voters to vote on behalf of the kids who are not yet old enough to cast a ballot.

“This year, much more is at stake than just the high-profile Presidential race,” said Stewart Kwoh, president and executive director of Asian Americans Advancing Justice-Los Angeles.  “In California, voters will decide the fate of 17 state propositions and many local measures. As important as the Presidential race is, our decisions on ballot measures and candidates for Congressional, state, or local seats will have a bigger impact on our daily lives. We believe it’s absolutely critical for everyone to go vote between now and November 8.”

In California, absentee ballots were sent out this week, so voters can start mailing in their ballots now.  Those who have not yet registered to vote have until Monday, October 24 to do so.  Californians can register online at www.registertovote.ca.gov (available in eight Asian languages and Spanish) or check their registration status through www.sos.ca.gov/elections/ registration-status.

The last day to vote in-person or to postmark your ballot is Tuesday, November 8. “Know Your Voting Rights” materials, which highlights voters’ many rights at the ballot box, including the right to language assistance at the polls, from Advancing Justice-LA are available in 10 Asian languages and Spanish atwww.advancingjustice-la.org/ voting-rights.  Deanna Kitamura, voting rights project director at Advancing Justice-LA, explained why translated materials are particularly important: “In our state, over 2.6 million eligible voters are not fully proficient in English, including 47 percent of the eligible voters who are naturalized.  Many of them may not know the voting process or their rights. Access to registration and voting rights information in their native language will ensure they are able to assert their right to vote.”

Power of the AANHPI Vote

In 2016, the more than 1.7 million AANHPI voters in California will comprise an estimated 11 percent of the state’s electorate. A rapidly growing segment of the electorate, Asian American voters in 2012 exceeded the margin of victory in 38 legislative districts in California. To help increase AANHPI voter turnout this year, the 20-member non-partisan Your Vote Matters coalition (www.yourvotemattersca.org) is making 70,000 calls to AANHPI voters in Los Angeles and Orange Counties. Led by Advancing Justice-LA, Your Vote Matters is phone banking in 12 AANHPI languages with the help of more than 200 bilingual volunteers, including many high school students and other youth.

“2016 is such a critical election year,” said Aquilina Soriano-Versoza, executive director of the Pilipino Worker Center. “The Pilipino Worker Center is engaging all people in our community, whether they can vote or not, to help turnout voters like our constituents — low-wage workers and immigrants who are naturalized citizens — because they are often overlooked in existing efforts to educate and mobilize voters. We want our community to know that yes, your vote matters!”

To provide guidance to AANHPI community members on the large number of state and local ballot measures, more than a dozen AANHPI elected officials, nonprofit leaders, and community gathered on Thursday morning to share their ballot measure recommendations.

Mark Masaoka, policy director of the Asian Pacific Policy & Planning Council (A3PCON) stated: “Today, A3PCON released its comprehensive Voter Guide, both online and in print, with recommendations for all 17 state plus 5 local ballot measures. We know how overwhelming the ballot is and our intent is to provide a simple document with the context and intent of each measure as well as A3PCON’s collective recommendation on how to vote.”

Among the ballot campaigns highlighted at Thursday’s event were:

Yes on Proposition 55 (education funding):  “We need to pass Prop 55 to prevent a massive $4 billion cut to public education,” said Karin Wang, vice president of programs and communications at Advancing Justice-LA. “And we believe Asian Americans will help pass Prop 55, as our polling of Asian American voters has shown consistently that our community will support taxes that go towards expanding access to education.”
Yes on Proposition 56 (tobacco tax):  “We support Yes on 56 because tobacco use is the top cause of preventable disease, disability, and death for AANHPIs, and Prop 56 taxes tobacco to fund smoking prevention and health care,” said Rod Lew, executive director of Asian Pacific Partners for Empowerment, Advocacy and Leadership (APPEAL). “By generating billions of dollars for tobacco prevention and education, Prop 56 will save lives by preventing a new generation of AANHPI youth from taking up this deadly, costly habit of smoking.”
Yes on Proposition 58 (bilingual education):  “As soon as I came to the U.S., I looked for a school that offered bilingual Korean and English education, as my son did not know any English at that time,” said Kyoung Hee Choi, immigrant mother and staff at Korean Resource Center. “Thankfully, I found one in Glendale, and for the past eight years, my son has received a great bilingual education. And because he is bilingual, my son and I have great communication in Korean. Please vote Yes on Prop 58 to make it easier to have such wonderful bilingual education programs in more schools.”