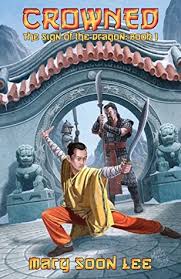 The Science Fiction Poetry Association announced several award winners this week, including the Elgin Award for Book of the Year for Mary Soon Lee’s epic, Crowned: The Sign of the Dragon Book 1.

The Sign of the Dragon is an epic fantasy told in poems by Mary Soon Lee featuring dragons, demons, and a heroic king. The beginning of the epic, Crowned: The Sign of the Dragon, Book 1 was published by Dark Renaissance Books in 2015, with illustrations by M. Wayne Miller.

Soon Lee was born in London, England. Mary Soon Lee attended Trinity Hall, Cambridge University where she gained an M.A. in mathematics and a diploma in computer science. There, she also met her husband, Andrew Moore. She later gained an M.Sc. in astronautics and space engineering at Cranfield University. In November 1990, she moved to Cambridge, Mass., where she lived for three years before coming to Pittsburgh. In 2003, she and her husband became US citizens.Her poem “Interregnum” won the 2014 Rhysling Award for Best Long Poem; the poem first appeared in Star*Line.Her other poetry credits include the American Scholar, the Atlanta Review, and the Pittsburgh Post-Gazette. Her short stories have appeared in The Year’s Best SF #4 and #5, edited by David Hartwell.

The Elgin Award is given by the Science Fiction Poetry Association to recognize the best full-length book and chapbook of speculative poetry published in the previous year. The Elgin Award is named after the founder of the Science Fiction Poetry Association, Suzette Haden Elgin. This year the second and third prizes for Full-Length Book went to The Robot Scientist’s Daughter, by Jeannine Hall Gailey and Dark Energies, by Ann K. Schwader, respectively.

The Science Fiction Poetry Association also presented their 2016 Elgin Awards for Chapbook of the Year. 1st Place went to Undoing Winter, by Shannon Connor Winward John Philip Johnson’s Stairs Appear in a Hole Outside of Town took second place in this category. Third place went to A Guide for the Practical Abductee by E. Kristin Anderson.

Additionally, the Science Fiction Poetry Association announced the winners of this year’s Dwarf Stars Award. Now in its tenth year, this award is given by the Science Fiction Poetry Association to recognize the best speculative poem of 1–10 lines published in the previous year. Hundreds of excellent very short science fiction, fantasy, and horror poems are regularly published each year, including scifaiku, tanka, cinquains, and other speculative short poems in poetry journals. The Dwarf Stars Award acknowledges excellence in this specialized field.

This year’s first place winner was “We Begin This Way” by Stacey Balkun, which first appeared in Gingerbread House 16.

Stacey Balkun received her MFA from Fresno State and her work has appeared or will appear in Gargoyle, Muzzle, THRUSH, Bodega, and others. She is a contributing writer for The California Journal of Women Writers. A 2015 Hambidge Fellow, Stacey served as Artist-in-Residence at the Great Smoky Mountains National Park in 2013. Her chapbook, Lost City Museum, is forthcoming from ELJ Publications. You can visit her website at http://www.staceybalkun.com.

This year had a 3-way tie for 2nd Place including “at the barre” by Julie Bloss Kelsey; “The Doorman” by F.J. Bergmann; and “Weathering” by Sandi Leibowitz. Third place went to John C. Mannone for his poem “Alice was chasing white rabbits out of a black hole.”

The SFPA was founded in 1978 to bring together poets and readers interested in speculative poetry and is an international literary organization. It produces two journals and confers three annual awards in speculative literature. You can visit them online at www.sfpoetry.com.