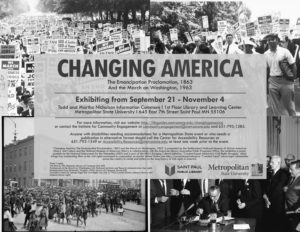 St. Paul, Minn. (Aug. 26, 2016 ) — Metropolitan State University is pleased to announce the opening of a new exhibition on campus, “Changing America: The Emancipation Proclamation, 1863 and The March on Washington, 1963.”

Metropolitan State University will be Minnesota’s sole host to the prestigious Smithsonian exhibit that examines two profound people’s movements in American history. In addition to its exclusive stop at Metropolitan State, the exhibit will be shown at 49 other venues across the nation.

Based upon an original interactive exhibition developed by the National Museum of African American History and Culture, this traveling version examines the impact of two great people’s movements that resulted in the Emancipation Proclamation in 1863, and The March on Washington in 1963. Both grew out of decades of bold actions, resistance, organization, and vision.

One hundred years separate them, yet they are linked in a larger story of liberty and the American experience – one that has had a profound impact on the generations that followed. The exhibition tells the story of how these two pivotal events came into being, a century apart, and how they helped put the nation on a course to fulfill its commitment to liberty and justice for all.

“We are thrilled and honored to host this important exhibit. The university is committed to building an anti-racist society and to graduating students who will make lasting change in their own communities,” says Greg Mellas, director of the Institute for Community Engagement and Scholarship. “This exhibit shows that organizing and taking action to demand justice has, at key points in our nation’s history, made our democracy more just and equitable. We know that work remains unfinished, but this exhibit reminds us of the progress that has been achieved through the power of collective action by those who came before us.”

The “Changing America” display is free and open to the public from Sept. 21 to Nov. 4 in the Todd and Martha Nicholson Information Commons on the first floor of Metropolitan State University’s Library and Learning Center, 645 East Seventh Street, Saint Paul. For information, parking details or to request a docent for a guided tour, visit our website or contact [email protected] or 651-793-1285.

ICES, with the university Library and Learning Center, the Saint Paul Public Library – Dayton’s Bluff Branch and other community partners will sponsor public programming to help audiences understand and discuss the relationship between these two great people’s movements, beginning with a public reception hosted 5 to 6:30 p.m., Sept. 29, at the library’s Susan A. Cole Lounge. A keynote presentation, 6:30-7:30 p.m. in Library 302, will feature Petronella J. Ytsma, photographer and community faculty at Metropolitan State, and William P. Jones, professor of history at the University of Minnesota and author of The March on Washington: Jobs, Freedom and the Forgotten History of Civil Rights (W.W. Norton, 2013). Their presentations will emphasize the relevance of these significant historic periods to events of today.

“Changing America: The Emancipation Proclamation, 1863 and The March on Washington, 1963” is presented by the Smithsonian’s National Museum of African American History and Culture and the National Museum of American History in collaboration with the American Library Association Public Programs Office. The exhibition is made possible by the National Endowment for the Humanities (NEH) and is part of NEH’s Bridging Cultures initiative, “Created Equal: America’s Civil Rights Struggle,” which brings four outstanding films on the civil rights movement to communities across the United States (see http://createdequal.neh.gov). “Created Equal” encourages communities across the country to revisit and reflect on the long history of civil rights in America.