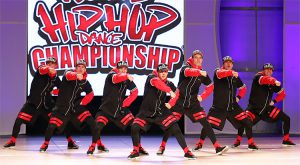 LAS VEGAS (Aug. 5, 2016) — At the same time the world’s best amateur athletes compete in Rio at the Summer Olympic Games, the world’s best dance crews will battle for the world title of hip hop dance in Las Vegas August 6-13 at the 15th World Hip Hop DANCE Championship. With National Champions representing 50 countries set to compete, the Championship is considered the Olympics of hip hop dance by spectators and participants from around the world.

The Championship is organized by Hip Hop International (HHI), the group responsible for MTV’s highly successful America’s Best Dance Crew. Recognizing the growing popularity of hip hop music and dance and the significance of its culture on millennials and young adults Hip Hop International began with 12 nations in 2002 and has grown steadily to its current 50 countries from the far reaches of the globe.  In the process, Hip Hop International has emerged as the world’s largest and most respected street dance organization

Among the 4000 dancers expected to compete in the 2016 event are Defending Champions from New Zealand, South Korea, Japan and the USA.  This year China, Taiwan, Nepal, and Dominican Republic will compete for the first time. The nations will gather at an Olympics-style village at the sold-out Westin Lake Las Vegas Resort, where most dancers will be housed and the action takes place.

The weeklong series of elimination rounds will begin on August 6 with the USA Hip Hop DANCE Championship to determine which crews will represent the United States at the World Championship. The World Hip Hop Dance Championship commences on August 8 with a colorful opening ceremony of waving flags, cultural fashion and international pride. Three days of preliminary and semi-final rounds will narrow the field for the World Finals at Thomas & Mack Arena on August 13, where a crowd of 10,000 spectators is expected.

The crews are judged by an international panel of experts trained by Hip Hop International.  HHI’s judging system is the gold standard to judge national championships worldwide to assure that all participants compete on a level playing field.

The USA & World Hip Hop DANCE Championships have proven to be a reliable launching pad for professional careers in entertainment.  One of many examples is 22-year old Parris Goebel, a New Zealander who won the first of her seven World Championship medals at age 17.  She went on to choreograph tours and videos for Janet Jackson, Rihanna, Jennifer Lopez and most recently Justin Bieber. Bieber’s “Sorry” video directed by and featuring Parris surrounded by her dancers has been seen more than 1.6 billion times!  https://youtu.be/fRh_vgS2dFE  Cirque Du Soleil holds casting sessions during the Championship each year and hires choreographers and dancers for its shows worldwide.