Warning: sprintf(): Too few arguments in /srv/users/aapress/apps/aapress/public/wp-content/themes/chromenews/lib/breadcrumb-trail/inc/breadcrumbs.php on line 253 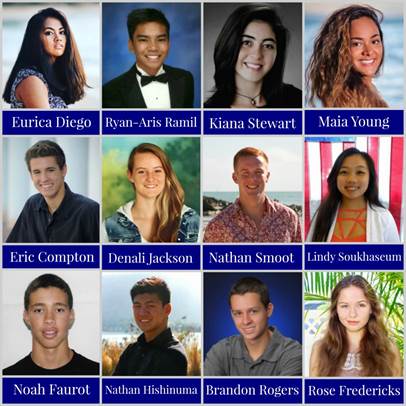 HONOLULU (June 27, 2016) — U.S. Rep. Tulsi Gabbard (HI-02) on Monday released announced the 12 individuals from Hawai‘i’s Second Congressional District who were accepted into the U.S. Service Academies and will be enrolling this month. The congresswoman nominated these 2016 high school graduates from a pool of extremely qualified applicants. The appointees will begin their enrollment at the Army, Air Force, and Naval academies this summer, and classes begin in August.

“These dedicated young men and women have already demonstrated their intelligence, work ethic, and commitment to service to their community and our country,” said Congresswoman Tulsi Gabbard, a twice-deployed combat veteran with the Hawai’i Army National Guard and member of the House Armed Services Committee. “The selection process is rigorous, but each of these impressive students has proven they have what it takes to be a part of the Academies’ leader-development programs steeped in academic rigor, military discipline, and physical challenges. I am so proud of Hawaii’s selectees and know that they will share the aloha spirit with their new friends and classmates from across the country as they pursue their education and military training at our prestigious academies.”