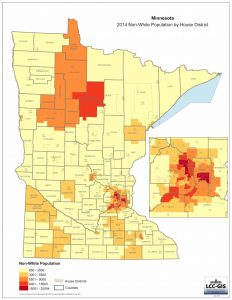 “With a $900 million budget surplus we need to address these disparities with urgency now,” said Rep. Rena Moran. “Families of color throughout the state have fallen behind and our economy will suffer if we don’t do everything we can to increase opportunity to students, workers, and business owners of color. We have the power to help, and we need to do it now.”

Racial economic disparities have reached a crisis level in communities throughout the state. According to the 2014 American Community Survey from 2013 to 2014, the median income for black households in the state fell 14 percent. In constant dollars, that was a decline from about $31,500 to $27,000 – or $4,500 in a single year. By those metrics, black families in Mississippi today can expect to earn more income than the median black family in Minnesota.

Racial inequality is not just holding back Minnesota’s African American community. The Wilder Foundation’s Minnesota Compass Project points out that all Minnesotans of color are more likely to live in poverty, less likely to graduate from high school, less likely to own their own home, and to suffer from unequal healthcare outcomes and access to care.

“We can no longer say that we don’t know what the problem is,” said Rep. Peggy Flanagan (DFL – St. Louis Park). “We know the problems, and now we need action and we need to invest in these Minnesota families. Even if Republican leaders would support a budget target for racial equity that was only half of Governor Dayton’s, that would be a start, but they are not even doing that.”

House Republican leadership set a zero or negative budget target for all areas of the state budget in their supplemental budget targets this session, and did not include a target for racial disparities. Republicans have argued they would address racial disparities by funding $19 million in voucher-style tax credits for private schools to address the educational achievement gap between white students and students of color.

Rep. Moran explained how that plan would not help families in her district.

“Families in my district don’t have money for private school tuition, which is necessary in order to get a tax credit for paying it. The median annual household income for black families in our state is $27,000. There is absolutely no room in a family budget like that for private school tuition,” said Rep. Moran. “We’ve proven in our neighborhoods that you can improve educational outcomes by investing in programs that work in school and out of school. If we are intentional about how we invest our surplus, we can have a major impact on Black, Asian, American Indian, and Latino communities across the state.”

DFL Representatives called on Republican House leaders to set a budget target of $50 million to make it possible for a racial equity legislative package to be voted on and debated in a conference committee among House and Senate conferees.

Rep. Susan Allen (DFL – Minneapolis) echoed the distress about the potential for no action on racial economic disparities this year.

“If we don’t act now, while we have this $900 million budget surplus, it will constitute more than simply not helping Minnesota’s communities of color,” said Rep. Allen. “If we don’t act this year when we know the problems we face, it will amount to intentional harm to thousands of Minnesotans in communities across our state who face racial inequality in education, healthcare, housing, employment, and home ownership. In any other setting such intentional harm would be a crime.”