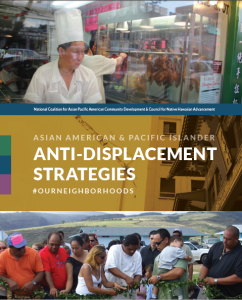 Washington, D.C. (May 11, 2016) – The National Coalition for Asian Pacific American Community Development (National CAPACD) and the Council for Native Hawaiian Advancement (CNHA) released Our Neighborhoods: Asian American & Pacific Islander Anti-Displacement Strategies at their report launch today. This timely report highlights twenty-four innovative strategies used by community-based organizations across the country to address the increasing displacement of residents and small businesses in their neighborhoods, using the local context as a springboard for federal policy recommendations.
Across the country, many AAPI communities live in high cost cities, often next to downtowns with skyrocketing rents and land values, which threaten the existence of these historic and affordable neighborhoods. As these neighborhoods witness rapid development, existing communities are often left out of the process.  New development models do not account for low-income, multigenerational, and extended family structures, nor does the process ensure protections for long-time residents and small businesses.  As a result, low-income AAPI communities are often unable to keep pace with escalating living costs:
•    From 2007 to 2014, AAPI poverty increased by 50 percent and Native Hawaiian/Pacific Islander poverty increased by 71 percent, compared to the general poverty population, which increased by 22 percent.
•    The median gross rent in the AAPI neighborhoods featured in the report has gone up by 74 percent from 2000 to 2014, compared to the national gross median rent of 53 percent.
•    In the featured AAPI neighborhoods, home values have increased by 112 percent, compared to the national home value increase of 57 percent.
In the face of rapid development that does not account for existing communities and high costs of living, AAPIs are most vulnerable to displacement from neighborhoods that have historically been their homes and cultural hubs. While AAPIs have grown by 6 percent nationally, there was a net loss of 1500 low-income AAPI families in historic AAPI neighborhoods from 2010 to 2014. In SoMa (South of Market), San Francisco, official evictions have increased by 55 percent for a total of 8,600 between 2010-2015, and 5,470 apartments were removed from rent control between 2004-2014, displacing and removing protections for the Filipino community that has lived and worked in the neighborhood. Hawai’i’s homeowners saw a 687 percent increase in home foreclosures between 2008 and 2010, resulting in a loss of $15 billion in home equity.
Confronted with these alarming statistics, National CAPACD and CNHA have produced this report as a national call to action and recognition of the innovative and resident-led work that is already being done on the ground to respond to the threat of displacement.  Michelle Kauhane, President and CEO of CNHA, states “This report tells the stories of our neighborhoods: most importantly, what people on the ground have been able to achieve by working in the face of massive forces. In Hawai’i, Native Hawaiians are developing and delivering their own land trust programs, rather than waiting for the state government alone to fulfill the tenants of the 1920 Hawaiian Homes Commission Act. Some of these programs are highlighted in our report.” The report includes other examples such as:
•    Asian Pacific American Network of Oregon (APANO) successfully organizing with other advocates to overturn a 17-year ban on inclusionary zoning in Oregon that previously limited access to and expansion of affordable housing, and developing an action plan around new transportation investments.  This is a critical step toward restorative justice for the communities of color who have historically been victims of Oregon’s highly segregated and exclusionary polices.
•    Philadelphia Community Development Corporation (PCDC) serving as the advisory Registered Community Organization (RCO) for the Chinatown area, which allows it to review projects, solicit feedback, and advocate for the community—a product of Philadelphia’s more progressive approach to development.  In this capacity, PCDC has worked to preserve Philadelphia’s historic Chinatown by mitigating the impact of development that threatens the neighborhood.
•    The Seattle Chinatown International District Preservation and Development Authority (SCIDpda)’s work with property owners to support the maintenance of community owned properties, and establishing IDEA space to encourage community engagement in  historic preservation and future development of Chinatown International District (Chinatown ID), one of 8 Historic Preservation Districts in Seattle.  In this capacity, SCIDpda has worked to support existing local businesses, promote innovation for economic development, and maintain affordable housing and commercial spaces.

Lisa Hasegawa, Executive Director of National CAPACD, states “We offer these strategies as a beacon of hope when the power of profit-driven development appears insurmountable. Our intent is to link together these local efforts to generate a national conversation and to leverage our collective wisdom to shape policies across the country. We launch our report today in DC in order to urge the federal government to address displacement as an issue that requires a national policy response.” The report proposes several policy recommendations that include a federal cross-agency hot markets program to address displacement, equitable transit-oriented development, meaningful community engagement processes, land equity and self-determination for Native Hawaiians, and mitigation of climate change displacement.
These policy recommendations were shared and discussed during the report launch at the National Low Income Housing Coalition today. At the launch, community practitioners from Boston, Philadelphia, Portland, Seattle, San Francisco, and Honolulu shared examples of local strategies that are highlighted in the report. National CAPACD engaged national partners and allies in a discussion on their policy recommendations and other appropriate responses to the crisis of displacement across the country. Key speakers and respondents included U.S. Department of Housing & Urban Development (HUD) Principal Deputy Assistant Secretary Harriet Tregoning, Right to the City Organizing Director Tony Romano, National Low Income Housing Coalition Chief Operating Officer Paul Kealey, and National Council of La Raza Wealth-Building Initiative Project Manager Sabrina Terry. The report launch was webcast live and over 75 people from across the country joined the webcast to share their own experiences, questions, and recommendations. The webcast will be available to view here.

Our Neighborhoods: Asian American & Pacific Islander Anti-Displacement Strategies and the conversation that began at the report launch are the start of a much larger initiative to work with federal agencies and national partners to respond to displacement of low-income AAPIs and other communities of color across the country in order to preserve neighborhoods that are homes, small business districts, and cultural hubs for these communities.
Congresswoman Judy Chu (CA-27), Chair of the Congressional Asian Pacific American Caucus, commented on the significance of the report, stating that “This groundbreaking report sheds light on a rapidly growing crisis in our country, and its impact on lower income Asian Americans, Native Hawaiians, and Pacific Islanders, who predominantly live in our major cities.  Many AAPI neighborhoods face grave challenges ahead due to skyrocketing rents and housing costs. The cultural neighborhoods where many live and work are at risk of being lost – meaning a loss of critical resources and support for our communities and less economic activity and cultural diversity for our cities. As Chair of the Congressional Asian Pacific American Caucus, I commend National CAPACD for bringing light to this important issue and to those organizations highlighted in the report that are finding ways to preserve these rich neighborhoods.”
To read Our Neighborhoods: Asian American & Pacific Islander Anti-Displacement Strategies, click here.

About National CAPACD:
National CAPACD is a national advocacy organization dedicated to addressing the housing, community, and economic development needs of diverse and growing AAPI communities. National CAPACD’s member-based network includes more than 100 community-based organizations and individuals, including community development corporations, preservation agencies, community-based social service providers, advocacy agencies, as well as national intermediaries and financial institutions. Our members are in 19 states, implementing innovative affordable housing, social service, community development, and community organizing strategies to improve the well-being of low-income AAPIs. www.nationalcapacd.org.
About CNHA:
The Council for Native Hawaiian Advancement (CNHA) was founded in 2001 to unify and build the capacity of Native Hawaiian organizations.  CNHA’s mission is to enhance the well-being of Hawai’i through the cultural, economic and community development of Native Hawaiians, through policy advocacy, community convening, leadership development, grant training and intermediary services, providing access to capital, and linking resources and solutions to community challenges.  CNHA is a HUD-Certified housing counseling agency and a Native CDFI certified by the U.S. Treasury Department. www.hawaiiancouncil.org

May 8, 2021
Joint statement of U of Minnesota programs on violence and the Atlanta shootings