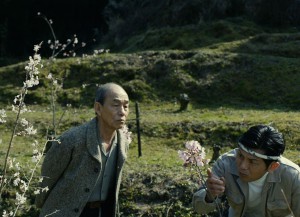 CALGARY (April 12, 2016) — As we enter the second week of the Minneapolis St. Paul International Film Festival (MSPIFF), there’s an upcoming Japanese film that spreads a much- needed message for our times.

Yoko The Cherry Blossom is written and directed by Gen Takahashi, one of the fifteen features selected for the Asian Frontier program at the MSPIFF. The director and cinematographer will be in attendance at the screenings.

Based on the inspiring true story of Masaaki Takaoka (Takashi Sasano), a retired school teacher in rural Japan, who has made it his personal mission to advocate for the ending of all wars. The film is set mostly in the 1970’s when we see a determined Takaoka venture to develop a new strain of hybrid cherry blossom that can grow in countries other than Japan. Takaoka has made it his mission to send the saplings out freely to all parts of the world, spreading his peaceful message with them. While the project sounds uplifting and the goodwill amounts, Takaoka’s son Seido is exasperated as he has to deal with the mounting debt his father has incurred while pursuing this personal crusade.

Takaoka’s sole supporter seems to be his loving wife, as a loyal daughter-in-law quietly stands by. Director Takahashi’s storytelling is delightful, almost comedic as we see the conflict between father and son intensify. Sasano portrays Takaoka vividly, a determined old man delivering his message of an ideal world of peace to anyone who happens to have a few hours to spare. The son Seido is like a Japanese Jim Carrey, his facial expressions could have been a bit restrained to allow more subtle effects. Overall, the light-hearted mood is an apt choice to package the serious thematic element. Benjamin Be’doussac’s original score adds to the viewing enjoyment.

Slowly we the viewers, along with Seido, come to know the reason why Takaoka is so persistent in his self-imposed mission. The crucial backstory comes forty minutes into the film and lasts only 12 minutes with a flashback of a young Takaoka, a devoted school teacher and patriot, encouraging his students to go to war to fight for the Japan Empire, inadvertently sending them off to their deaths, their bodies ultimately scattered on foreign soils. During the last farewell at the school, Takaoka and his students take a photo under a cherry blossom tree; he bids them safe return and to meet again under the tree.

While the purpose of the film is well-intentioned, and it is beautifully shot, the production can be turned into more of a gem if the story is told with a faster pace and redundant scenes cut out, especially the first part. After the crucial and brief backstory of Takaoka in WWII, the latter half of the film flows more swiftly and offers more dramatic impacts.

At the very end, together with Seido and the rest of Takaoka’s adult children, we come to realize that Takaoka and his Yoko Cherry Blossom project had been garnering commendations from leaders all over the world. Knowing the facts a bit late about a beloved but misunderstood father leaves the next generation with no chance to appreciate and admire the man. A worthy parting thought for viewers to ponder.

Find out more about the film here.