ST. PAUL, Minn. (April 28, 2016) — Reflecting the increasing diversity of a nation that is now 38 percent minority and 1 percent Indian American, the Smithsonian launched an exhibit entitled “Beyond Bollywood” to honor the contributions of Indian Americans to the nation’s history. The nation’s national museum showcased pioneering Indian Americans, including Rachel Paulose, Neel Kashkari, and Gopal Khanna of the Twin Cities.

Paulose was the first Indian American nominated by the President and confirmed by the Senate when she served as Minnesota’s U.S. Attorney from 2006-2008. She initiated new prosecution priorities to fight human trafficking, child pornography, and mortgage fraud. She is now a partner at the global firm of DLA Piper LLP after having served 15 years in federal law enforcement. Paulose’s family immigrated from Kerala, India to Minnesota in the 1960s.

Kashkari is the President and CEO of the Federal Reserve Bank of Minneapolis. A former Goldman Sachs investment banker, Kashkari is generating international headlines for his proposals to break up big banks to avert another potential economic crisis. Kashkari’s parents immigrated from Kashmir, India to Ohio in the 1960s. 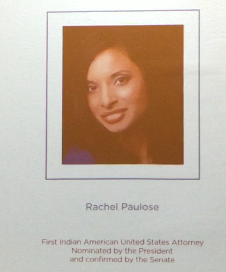 The Smithsonian unveiled a special preview of the Minnesota opening on April 27, 2016 at the Minnesota History Center. An overflow crowd packed the 3M Auditorium for a 90 minute program. The program featured talks from curator Masum Momaya and Minnesota Historical Society leaders. Artists also presented classical Indian dance and music.

“Beyond Bollywood” is now a traveling exhibit touring the nation. The exhibit is open to the public and will remain on display in St. Paul at the Minnesota History Center until July 10, 2016.