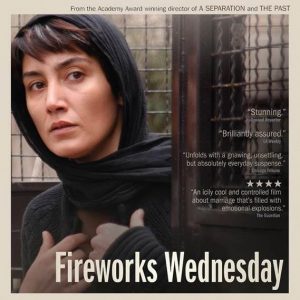 CALGARY (April 20, 2016) — “Fireworks Wednesday” is Academy Award winning director of “A Separation” (2011) and “About Elly” (2009) Asghar Farhadi’s earlier work. It is interesting to look back now at the film produced in 2006, for viewers can see in “Fireworks Wednesday” a foundational achievement that is evident of Farhadi’s skills in depicting conflicts and tensions. “Fireworks Wednesday” shows the director’s early mastery of the marital drama, deftly adding suspense and psychological sparks to his storytelling.

Subsequent films after “Fireworks” had solidified Farhadi’s international reputation as an auteur that can be equally suspenseful and relational in his portrayals of domestic conflicts and their consequences. His most recent work, “The Past” (2013), continues the series of gripping family dramas told with nuanced details.

The title “Fireworks Wednesday” refers to the last Wednesday that precedes the spring-equinox arrival of the Persian New Year. The streets of Tehran are filled with raucous celebrants setting off fireworks. That is the day when a young woman Roohi (Taraneh Alidoosti), a bride-to-be, is called to work as a temporary help in the apartment of an upper-middle class couple, Morteza (Hamid Farokhnezhad) and Mozhde (Hediyah Tehrani). That morning, Roohi arrives to the aftermath of a quarrel from the night before, a broken living room window and shattered glass everywhere, the home in disarray. The young and naive bride-to-be is about to see another kind of fireworks she could not have imagined.

The quarrel is about Mozhde’s suspicion that her husband is having an affair with the woman who runs a beauty salon right in the next unit, Simin (Pantea Bahram). On the spur of the moment, Mozhde recruits Roohi to spy on Simin for her. Using the excuse of an appointment before her wedding, Roohi goes over to Simin and begins to get entangled in a marital conflict that makes her take side. Young and inexperienced, the bride-to-be gets an eye-opening lesson on the complications of marital relationships. Who is she to trust? Is her boss Morteza really cheating on his wife or is Mozhde too neurotic and suspicious?

Then there is their young son Amir Ali (Matin Heydarnia) being caught in between his parents, albeit his loyalty falls more with his Dad than his Mom, as Morteza has promised to bring him to the fireworks that evening. Roohi has to tag along with the father and son as Morteza will drive her home after.

Here in this last act of the film, Farhadi’s skill in storytelling is most adroit. A twist at an unexpected moment turns the story as well as Roohi’s view upside down. Her nuanced facial expression tells us she will be going to meet her fiancée that night with an altered view of marital relationships, possibly resulting in a different frame of looking at her own future. The film’s open-ended finish makes it all the more intriguing.