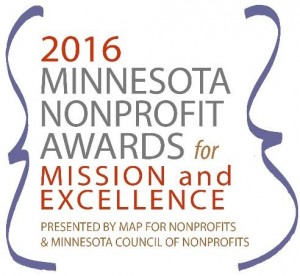 ST. PAUL, Minn. (April 2, 2016) — The Minnesota Council of Nonprofits (MCN) and MAP for Nonprofits have opened nominations for the 2016 Nonprofit Mission and Excellence Awards. The awards are presented annually in an effort to recognize a wide array of nonprofit organizations make outstanding contributions to Minnesota’s high quality of life.

Each year, six Minnesota-based nonprofit organizations are honored with awards in the areas of: Innovation, Advocacy, Anti-Racism Initiative, Responsive Philanthropy and Excellence (large and small organizations).

Award-winning organizations receive the distinction of being recognized as a leader among Minnesota’s nonprofits during the 2016 MCN Annual Conference in Duluth; a professional video capturing the organization’s award-worthy work; a one-of-a-kind art glass award from Minnesota glass artist Robinson Scott; a feature profile in MCN’s Nonprofit News; and a cash award (for all recipients except for Responsive Philanthropy recipient).

Nominations for the 2016 Mission and Excellence Awards must be received by Monday, May 16, 2016. More information on the awards and nomination process, as well a list of past award recipients, can be found at www.minnesotanonprofits.org/mission-excellence-awards.

The Minnesota Council of Nonprofits (MCN) was founded in 1987 to meet the increasing information needs of nonprofits and to convene nonprofits to address issues facing the sector. It is the largest state association of nonprofits in the U.S. Through MCN, nonprofits join together across interest areas to work on issues of common concern to all.

Since 1979, MAP has worked to strengthen the Minnesota nonprofit community by connecting organizations to sound governance, strategy, and finance and accounting practices. MAP’s mission is to maximize community impact of nonprofits and social innovators through consultation, training and support.