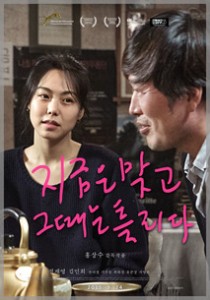 CALGARY (March 27, 2016) — Korean director Hong Sang-soo toys with the idea of second chances in his own script of this internationally acclaimed film. If we could delete and restart those episodes in our lives that did not end well, how would we have done it the second time? Handling it differently could have changed the course of our life, or added some spice to it at least.

“Right Now, Wrong Then” tells the story of a film director, Chun-su (Jung Jae-young), who comes to a small city a day early for a screening of his film and a talk. He coincidentally meets an artist Hee-jung (Kim Min-hee) and strikes up a conversation with her. They end up spending the rest of the day together.

After drinking with Hee-jung at a sushi restaurant, Chun-su goes with her to her friend’s house for a gathering. Under the influence of alcohol, he reveals some information about himself that does not sit well with his new friend. So, second time around, would he have done it better? The second half of the film Hong lets us see what could have happened, totally worth exploring for the curious viewer.

A Korean fusion of Before Sunset, Groundhog Day, and About Time, Hong’s version teases us with a nuanced, Asian touch of mannerism and humor. The film won him the Golden Leopard at the Locarno International Film Festival, with Jung winning Best Actor. Hong’s work has also received several nominations and awards in other film festivals and critic circles. “Right Now, Wrong Then” has been screened the world over including Toronto, New York, London and Tokyo among other cities. Showings at the Minneapolis, St. Paul International Film Festival are Saturday, April 9 at 9:30 p.m. and Thursday April 14 at 2 p.m. at St. Anthony Main Theatre 4.