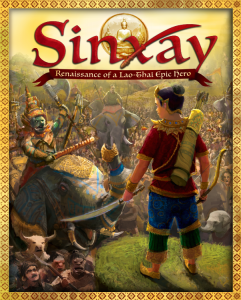 For a long time, the majority of legends and myths from Asia brought to the US have been from Japan, China, Korea and India. That has been changing in recent years as more Southeast Asian stories make their way into various childrens books and folklore anthologies.

There have been few that have made their way to the mainstream public from Laos, however. That’s changed this year with the promising debut from Sinxay Publishing, who released a lavish retelling of the legend of Sinxay in Sinxay: Renaissance of a Lao-Thai Epic Hero from Bai and Peter Whittlesey.

The tale, set in a distant fabled past was said to be inspired by an apocryphal previous life of the Buddha in the Pannasa Jataka, according to the poet Pangkham. Pangkham is said to lived in the city of Vientiane during the Lan Xang era of what is now modern Laos and composed it during the mid-1600s. His poem about the life of Sinxay has been called a national treasure by the Lao, although with the rise of modernity, there are few in the younger generations familiar with the story, especially in Southeast Asian communities abroad.

The plot of the story centers around a young man named Sinxay who must rescue his aunt Soumountha who has been kidnapped by a fearsome giant named Nyak Khoumphan. As with many stories of this nature, there are banished sons, sibling rivals, fantastic beasts and mighty trials. There isn’t a romance, but a tremendous sense of duty to family, and this translation/retelling makes Buddhist values shine through.

The Whittleseys were presented with an interesting challenge of how to present the work of the poet Pangkham in another language, because a literal translation from Lao would not quite capture the vibrance and dynamic elements that have made it such a beloved tale. They spent years interviewing monks, scholars, writers, performers, politicians and others across Laos and the Isan region of Thailand, taking photographs and documenting the way the story has been preserved and revived. In addition to numerous explanatory essays in the book, they have maintained an extensive blog online at their website sinxay.com with resources for people who want to learn more about the epic.

The writers even commissioned a three-hour dramatic recording of the chant of Sinxay by Bounteum Sibounheuang for the public. This edition of Sinxay should not be considered a full literal translation of the work of the original text by Pangkham, but an adaptation that incorporates additional oral traditions and original narrative details. Additionally, this version includes a popular sequel/alternate ending in which a slain villain is brought back to life. It’s clear this book will be a delight to readers for years to come, useful for many who have an interest in Laos and Southeast Asia.

The Whittleseys do an excellent job at rendering this classic story in a clear, simple manner that can be understood, while retaining its complexity and intricacy. The writers are balancing a significant amount of cultural preservation and innovation. They provide ample photographs of the story of Sinxay as preserved in temple murals and drawings throughout Laos and Isan. The popular Lao artist Khamla Phanysith contributes several wonderful pieces of art to the book. The American artist Nick Bowen provides some absolutely stunning illustrations while one of the best fantasy map cartographers in the world, Robert Altbauer from Salzburg, Austria, presents an amazing map of the world of Sinxay and his journey.

The book has been made available on Amazon and also directly at their website at www.sinxay.com.