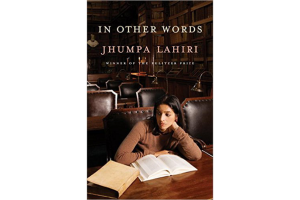 EDMONTON (March 13, 2016) — A couple of years ago, I was surprised to read about Jhumpa Lahiri moving to Italy to live, even just for a few years.

Author of four works of fiction – Interpreter of Maladies, The Namesake, Unaccustomed Earth, and The Lowland – at the prime of her writing and teaching career, having received the O. Henry Award in 1999, the Pulitzer in 2000, and her latest The Lowland shortlisted for the Booker in 2013, Lahiri decided to uproot her family and move to Italy to totally immerse in the Italian language. That means speaking, reading and writing in Italian.

In Other Words is Lahiri’s brave and candid account as a language learner. It compiles twenty-one essays and two short stories which she wrote in Italian. It is like swimming out into the lake instead of safely hanging around the shore, a metaphor Lahiri uses to denote her language learning experience. From what she describes about the challenges, the risks, the loss of anchor, the inability to express herself and be literate, let alone literary, the disorientation, the total humbling, her venture is more like jumping off a precipice to billowy waters of unfathomable depth.

My hats off to Lahiri’s honest revealing of her frustrations and her strive for an identity; yes, after all, language is a major determinant of identity, one which is, unfortunately, superseded by one’s outer appearance and racial features. So it is heart-wrenching to read that despite her love for the Italian language, her total devotion to adopt it not just to live but as a tool of her trade as a writer, she is often seen as an outsider, a foreigner, barred from acceptance. Even when she speaks to Italians fluently in their language, they would respond to her in English.

English, that’s the rub. I was surprised to read that, while she had achieved so much in her literary career as a writer in English, she chose to discard it to totally immerse in Italian. In the chapter entitled “The Metamorphosis”, she candidly admits that her writing in Italian (which she had been learning in America for some twenty years before) is a flight:

[“Why am I fleeing? What is pursuing me? Who wants to restrain me?
The most obvious answer is the English language. But I think it’s not so much English in itself as everything the language has symbolized for me…It has represented a culture that had to be mastered, interpreted. I was afraid that it meant a break between me and my parents. English denotes a heavy, burdensome aspect of my past. I’m tired of it….”

Of course, that’s also the language that she loved, and succeeded with. The conflict in identity, first as an Indian immigrant with Bangali as her mother tongue, then as a writer in English who had garnered the Pulitzer Prize, an award that she felt she did not deserve, had shrouded her with unresolved tensions. Lahiri had felt deeply the tug of war between her parental heritage and adopted land. A rejection of both had silently crept in. Italian provides a way out:

[“Italian offers me a very different literary path. As a writer I can demolish myself, I can reconstruct myself, I can join words together and work on sentences without ever being considered an expert. I’m bound to fail when I write in Italian, but, unlike my sense of failure in the past, this doesn’t torment or grieve me.”

Unbelievably surprising and honest, written in Italian and translated by The New Yorker editor Ann Goldstein, the bilingual book compiles both the English and the Italian versions.

If this book was published a couple of decades earlier, I would likely have another topic for my thesis in my graduate work on second language learning; not only that, my view of English being the lingua franca, the language holding linguistic hegemony, would have completely changed as well.