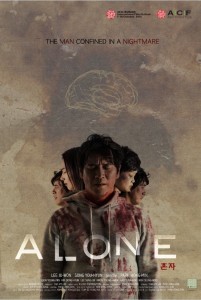 CALGARY (March 27, 2016) — “Alone” (Korea, 2015, M-Line Distribution) starts with a tense opening scene as we see a young man (Lee Ju-won) from the top of an apartment building witnessing a woman being assaulted by several masked men on the rooftop of another building. He records the crime with his camera but soon realizes that he has become the target as the men hurry over to look for him. They smash into his apartment unit, beat him up and snatch his camera. Just as he is about to be hit on the head by a hammer, he wakes up on the street at night, unharmed and naked. He runs down the streets in the dark, frightened and confused.

What starts off as a suspense thriller is gradually infused with personal back stories of the protagonist’s. Director Park Hong-min’s handling of these scenes are often elliptical, not saying much to explicitly tell the stories but just let the drama and dialogues speak for themselves. Like the dimly lit alleys of hidden secrets, the director reveals the character’s past to shed a little light on his present mental anguish.

We follow the main character as he wanders and stumbles aimlessly through the dark alleys at night. At one point, he encounters a child all alone, running away from an abusive father. In another scene he finds a young woman, Ji-yeon (Song You-hyun) and pleads with her to stay but in the next breath drives her away. Such conflicting emotions extend to another relationship, that with his mother. We glimpse into an unhappy home, disharmonized parents, an abused wife and the devastating aftermath.

The camera’s long takes following the protagonist through dark alleys is an apt metaphor for the labyrinth of the mind. As the man struggles with deep-seated, hidden memories, he comes to realize why he is the way he is. Reminiscence of a Freudian session, Park blurs the lines between past and present, reality and dream. As we see the contrasts of light and darkness in the urban streetscape at night, we see the obscure lines separating a victim and instigator of conflicts in our relationships, especially for one suffering the long-term effects of a dysfunctional home. Alone is a fresh way of exploring the inner depth of the human psyche, presented in an entertaining fusion of mystery, thriller, drama and fantasy.

From the Minneapolis St. Paul International Film Festival website, we read the director’s personal statements. Park has noted that: “I planned and produced the movie Alone to take a step back and look at myself. I also wanted to be healed through this work by asking myself varied questions.” This candid admission is most revealing.

The film would definitely spark questions in viewers’ mind. There is a good opportunity to find the answers as Park will be in attendance at both screenings of his film. Showings at the Minneapolis St. Paul International Film Festival on Friday, April 8, 7:05 p.m. and Sunday, April 10, 6:55 p.m., at St. Anthony Main Theatre 5.