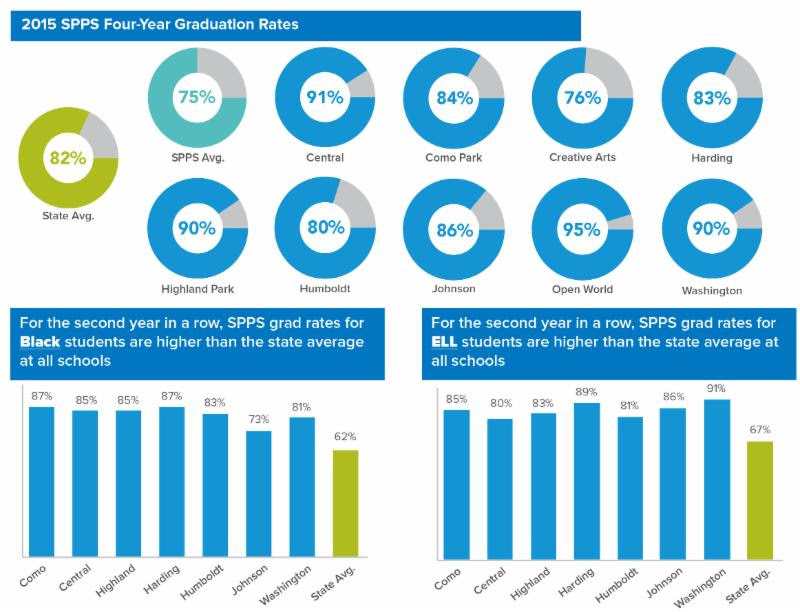 “In each of the past six years we’ve seen an increase, and this year we’re holding steady,” said SPPS Superintendent Valeria Silva. “At the same time, we continue to close the graduation gap for students of color.”

Seven high schools in the District are above the state average of 82 percent for graduation.

According to the data released today by the Minnesota Department of Education, graduation rate highlights for SPPS including the following:
• Graduation rates for Hispanic students have increased for seven consecutive years.
• Graduation rates for Black students have increased for four consecutive years.
• Focus and Priority schools saw impressive results.
• Creative Arts Secondary, which is a priority school, shows 76 percent – a promising baseline.
• Humboldt Secondary School, a Focus school, saw an increase of 8.84 percentage points.
• Highland Park Senior and Washington Technology Magnet are showing three years of continual improvement.
• At both Washington Technology Magnet and Humboldt Secondary, all student groups saw increases from 2014 to 2015.

Among these groups, SPPS saw the largest increase for Hispanic students: from 69.39 percent to 71.65 percent, an increase of 2.26 percentage points.